SINGAPORE (ICIS)–Tight propylene (C3) supply in northeast Asia amid a heavy turnaround schedule in 2018 will continue supporting regional prices of the material into the second half.

Sellers are likely to continue passing on high cost to buyers, which are wary of October, when heavy propylene production losses are expected. 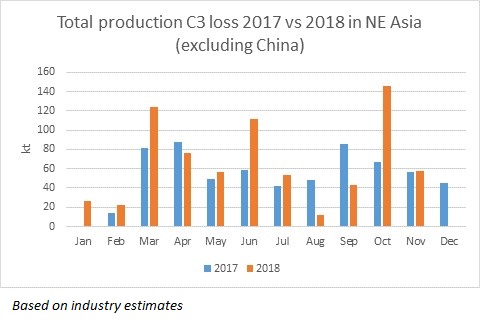 Buyers’ resistance in the key China market would keep any further increase in propylene prices in check, with some downstream producers considering cutting output due to high feedstock costs.

At the start of June, propylene prices have weakened, ending the strong general uptrend since end-March, tracking weakness in China’s domestic market as demand softened due to turnarounds at downstream polypropylene (PP) plants.

But the downward pressure on regional prices may be temporary as overall supply in Asia is expected to be tight.

Based on latest assessment, spot propylene prices in northeast Asia were about 9% higher from the start of 2018, according to ICIS data. 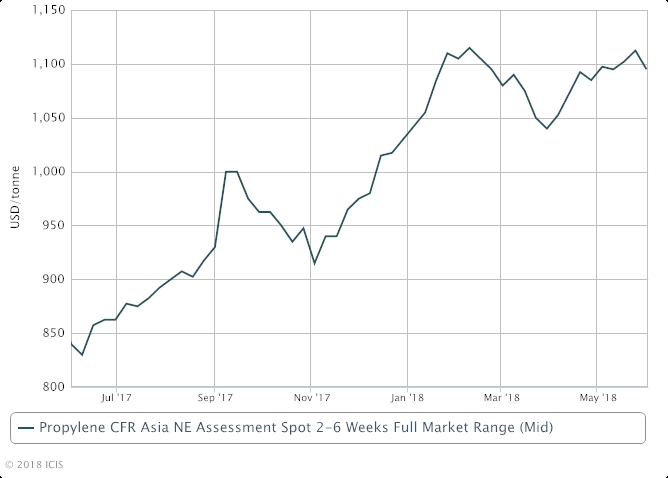 The year started on a bullish note, fueled by a heavier cracker turnaround schedule compared with 2017, and higher premium levels concluded for contract cargoes.

The uptrend was sustained into February due to restocking activities in various import markets in northeast Asia before the Lunar New Year, which was on 16 February.

Before the holidays, some South Korean producers were convinced the market will experience supply shortage as both GS Caltex’s fluid catalytic cracking (FCC) unit with a 250,000 tonne/year propylene capacity, and Yeochun NCC’s (YNCC) cracker – which can produce 280,000 tonnes/year of propylene – due for maintenance in February through to April.

A renewed wave of scheduled turnarounds at regional plants tightened supply and drove up propylene prices in April and May.

In Taiwan, Formosa Petrochemical Corp (FPCC) took its residue fluid catalytic cracking (RFCC) unit with a 350,000 tonne/year propylene capacity off stream from 1 March to mid-April; while CPC Corp shut its 100,000 tonne/year FCC unit off stream on 10 April and restarted in early June.

In South Korea, GS Caltex also had a turnaround at its FCC unit with a 250,000 tonne/year propylene capacity from 19 February to 5 April.