US October propylene contracts roll over

HOUSTON (ICIS)–US October propylene contracts settled at a rollover for the majority of the market, sources confirmed, amid supply and demand fundamentals that remained balanced despite some production issues. 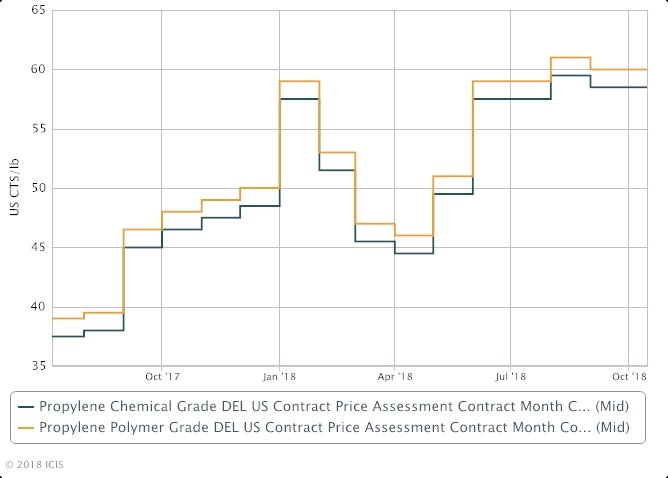 Propylene supply has become tighter in recent weeks. Most propylene is made in refineries, followed by crackers, then propane dehydrogenation (PDH) units and other sources.

Refinery operating rates began declining in recent weeks and fell below 90% in the week ended 5 October for the first time since early March amid maintenance outages. Refineries typically conduct short turnarounds in the autumn as they transition to produce winter fuels.

Production from crackers has been limited due to the increased usage of ethane as a feedstock. Ethane makes the least amount of propylene co-product when cracked. But as the most economical feedstock for ethylene, it has been favoured amid low ethylene prices and tight cracker margins.

Production from PDH units has been volatile, with the most recent outage resolved late last week.

The inventory picture is unclear, with the market brushing off a late September steep decline in reported levels, with many suspecting that it reflected a change in reporting rather than a change in stocks. Propylene inventories at 2.038m bbl on 5 October are 14% above four weeks prior, but 33% below the same week in the prior year. 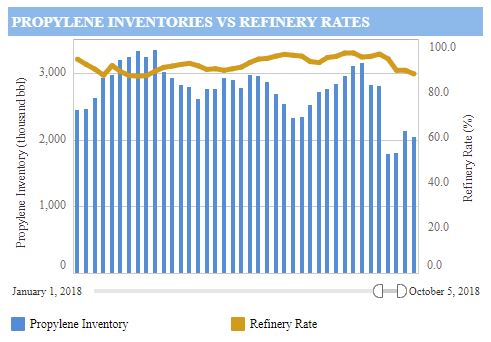 “People who need spot can find spot and don’t have to pay a premium for it,” a market source said.

Front-month PGP has traded in a narrow range of 56.50-57.75 cents/lb during the first half of October despite an active market. Spot prices were in a similarly narrow range during September, which is in contrast to the steep swings seen during much of the rest of 2018. 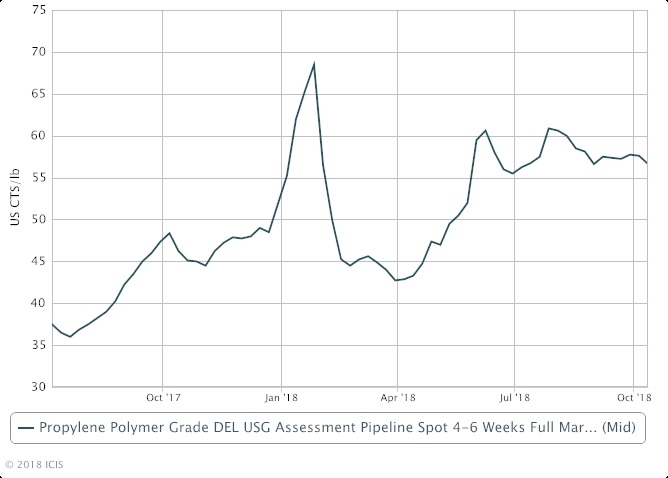 A drop in demand may have helped offset some of the recent production issues, amid lower downstream polypropylene (PP) operating rates in September. PP is the largest consumer of US propylene.

US propylene prices for several months have been well above those in Asia and Europe, causing domestic derivatives to be less competitive against low-cost imports.

There had been little propylene demand drop-off over the last several months, due to strong demand or tight markets in downstream sectors. But the continued disparity in costs could be taking a toll on US derivatives.

Image above shows bottle caps, which are often made of PP, the main use of propylene. Photo by Eye Ubiquitous/REX/Shutterstock