Industry insiders are saying double digits this month for propylene price increases . . . propylene glycol is nominated up 10c by Dow and LyondellBasell for January.  Also remember Dec 2012 when chemical grade propylene was 56.5c/lb, only to rise to 77.5c/lb by February, but then fell back to 61.5c/lb by April.  I’ll post the seasonal trends next week.  Have a good weekend!

US PP market anxious over sharp rise in propylene costs

HOUSTON (ICIS)–The US polypropylene (PP) market is experiencing some anxiety, as prices are set to see significant upward movement in line with the sharp upward trend in feedstock propylene costs.

A deal for spot polymer grade propylene (PGP) was heard this week at 62 cents/lb ($1,367/tonne), a jump of 10 cents/lb compared to the last confirmed spot deal ahead of the New Year holidays. January contracts are expected to settle higher following the spot market trend, with initial nominations being heard at a 5-8 cent/lb increase prior to the new spot deal.

US PP prices are formula based and are set at the PGP price plus an adder. Thus, the large jump in feedstock costs will lead to a significant jump in US PP prices. Participants are concerned about the possibility of demand destruction in the wake of consecutive price increases, and there is speculation in the market that PP producers may need to reduce their operating rates in the face of the large run-up in prices likely to occur in January.

PP buyers in at least some applications may consider inter-polymer substitution and may turn to alternatives such as polystyrene (PS) and polyethylene (PE). Imports are another possibility for buyers, although orders placed today would not arrive until March or April.

With the landed cost of imports being estimated at around 62-70 cents/lb, imports could theoretically take market share from domestic producers if propylene costs continue to remain high.

In the domestic spot market, off-grade cargoes for PP homopolymer were heard at 52-54 cents/lb, while an offer for wide-spec PP co-polymer was heard at around 51 cents/lb.

ICIS assessed December contracts for homopolymer PP injection at 68-72 cents/lb delivered in bulk US, while contracts block copolymer PP were assessed at 69-73 cents/lb with the same terms. 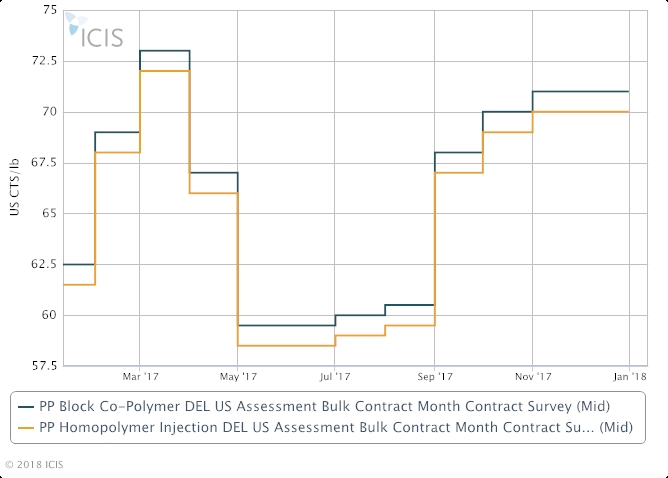