US propylene production set to expand in 2018

HOUSTON (ICIS)–With the start-up of a new propane dehydrogenation (PDH) unit and several crackers, propylene capacity in the US is set to expand during 2018, while downstream capacity remains steady.

Enterprise Products’ 750,000 tonne/year PDH unit had been expected to start-up in September prior to Hurricane Harvey. Effects from the hurricane delayed the unit’s commissioning schedule, and the company had said it expected to start up the unit in November. While market sources have said that start-up activities for the unit had begun in late November, the company said in a government filing that start-up activities could continue into late January.

Aside from the delay in the PDH start-up, Hurricane Harvey in late August had caused multiple outages for propylene production from refineries and olefin units. Although many outages resolved in the weeks following the hurricane, several olefins units were offline into November and one into December.

Meanwhile, refinery operating rates remained below pre-Harvey average until late November, according to data from the US Energy Information Administration (EIA).

Following the production disruptions, inventory levels in late 2017 remained low compared to prior years. For the week ended 8 December, propylene inventories at 2.481m bbl were down from the prior year by 47% and down from the average of the prior five years by 32%, according to EIA data.

With production normalised following Harvey and with the ramping up of the new Enterprise PDH unit, inventory levels should recover in early 2018.

The spread between RGP and PGP prices can vary, but has generally been 9-12 cents/lb ($198-265/tonne) in 2017. Increasing propylene production from non-refinery sources could widen the spread between these products. 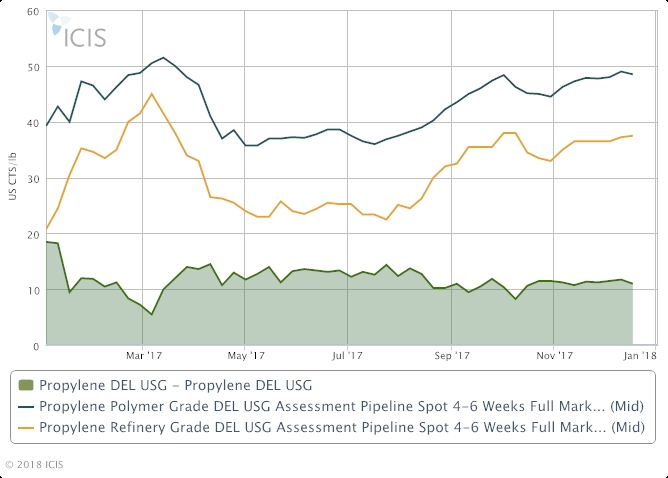 Farther along in the year, additional production is expected due to a continuing wave of ethylene capacity expansion.

The new crackers expected to come online in 2018 will be favouring lighter feedstocks, mainly ethane, which tends to produce less propylene than feedstocks like naphtha. However, ethane crackers still produce about 3% of propylene and the planned 7.62m tonnes/year of ethylene capacity could produce more than 200,000 tonnes/year of propylene co-product.

Despite the expected increase for propylene production during 2018, there have been no major capacity increases announced for derivative markets during 2018. This may lead to some lengthening for propylene as cracker projects come online.

However, strong consumption may keep propylene balanced in the first half of the year. Following multiple natural disasters in the US in 2017, demand for industries related to construction, furniture and vehicles is expected to be strong early in 2018.

Polypropylene (PP), which consumes about 50% of US propylene, may also receive a demand boost from expected recovery efforts as it can be used for automotive parts. However, high propylene prices in late 2017 have pushed up domestic PP prices. Further increases could lead to increased PP imports or inter-polymer substitution and could lower propylene consumption for PP production. 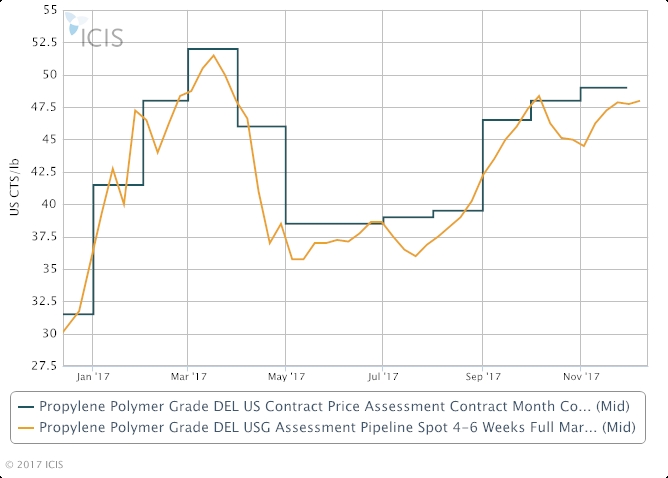