HOUSTON (ICIS)–US March propylene contract prices been settled by a majority of market participants at a 6 cent/lb ($132/tonne) decrease from the prior month, market sources said on Wednesday.

The March settlement is the second consecutive decline for propylene contract prices and follows recent declines in propylene spot prices.

Spot PGP prices had reached into the upper 60s cents/lb in January as prices spiked amid issues with several propane dehydrogenation (PDH) units in the US Gulf.

Those high prices led to lower operating rates for downstream polypropylene (PP) as derivative buyers turned to imported material. PP is the largest consumer of propylene in the US, and the lowered demand helped ease the tight market.

Demand has begun to rebound in March as propylene prices have dropped, but propylene consumption rates are expected to increase gradually.

However, increasing production has added further downward pressure in March. A new PDH unit is operating well after several months of ramping up and an existing PDH unit restarted in early March after a months-long outage. 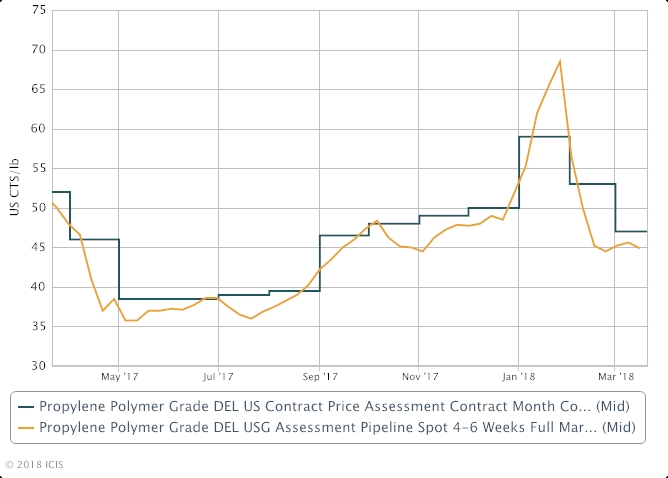