US propylene market to remain volatile through 2018

“I am on the bull train until the market does an abrupt bearish turn – which is likely but difficult to say when,” one market source said. 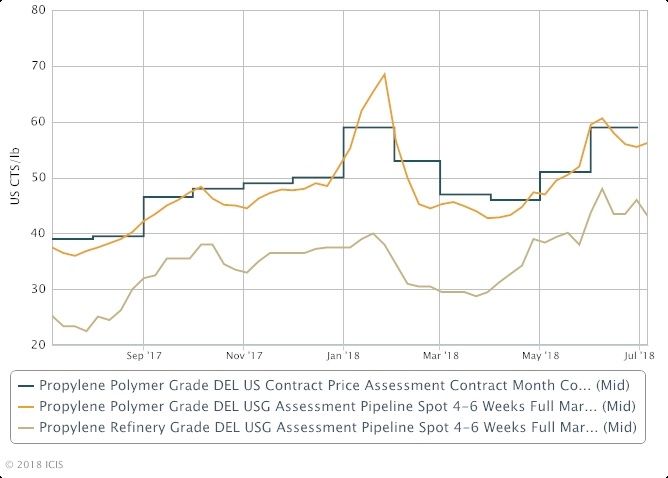 The new Enterprise propane dehydrogenation (PDH) unit reached full operating rates in the first half of this year after multiple delays in 2017.

The delayed start-up and slow ramp-up of the unit, in combination with outages for the other two PDH units in the US Gulf, tightened propylene supply and caused propylene prices to spike in early 2018.

However, lower production from refineries and crackers has kept propylene snug heading into the second half of 2018.

Most propylene in the US is produced in refineries as a co-product of gasoline. Production was limited in the second quarter due to turnarounds and outages.

The second largest source of propylene in the US is crackers, which produce it as a co-product of ethylene.

A sharp decline in ethylene prices in the second quarter caused crackers to heavily favour less-expensive feedstock ethane, which produces the least amount of propylene compared to other feedstocks. In May a US cracker was idled, a move market sources attributed to the low ethylene prices.

Propylene inventories at the end of June were at their lowest point in nearly two years.

Production from refineries is improving, with refinery operating rates above 95% during June.

However propylene production from crackers could remain limited due to oversupply of ethylene, which is expected to continue through the second half of 2018 as more crackers come online.

While economics have improved for heavier feedstocks like propane and butane, increases in crude oil values could reverse that trend. Continued ethylene length could also result in lower cracker operating rates or more idled units.

Limited propylene production from crackers could keep the propylene market snug and prone to tightness during refinery or PDH unit outages. Supply tightness is expected to drive price spikes, as in early 2018 and in June.

Price spikes in propylene may lead to demand destruction, as had happened in early 2018.

In January and February, downstream polypropylene (PP) production had fallen by 16% and 23% from December as PP buyers balked at the pass-through increases in US propylene prices and turned to imports. PP is the largest consumer of US propylene.

Recent price spikes also could lower demand in coming months, although the fall-off in demand so far seems less extreme than in early 2018 amid good demand for downstream PP.

“I expect the RGP-PGP spread to go back to Q1 levels,” another market source said. 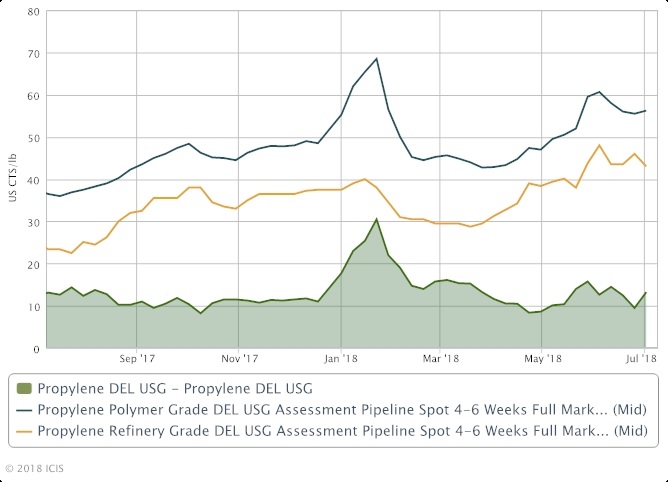 In early 2018 when propylene increases were driven by PDH problems, RGP supply and prices were less affected. The PGP-RGP spread widened as far as 30.5 cents/lb ($672/tonne) from the typical 10-15 cents/lb.