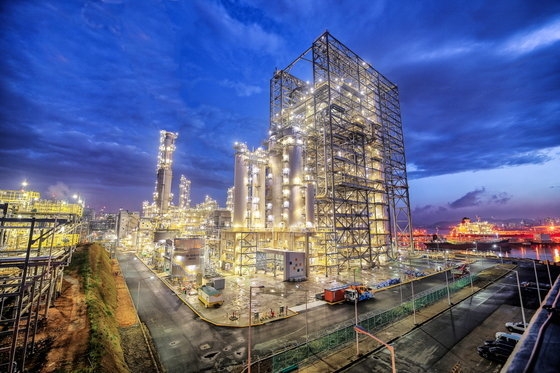 S-Oil’s residue upgrading facility (S-Oil)
S-Oil, South Korea’s No. 3 refiner, is expected to see an improvement in profits this year, continuing a recovery momentum from the final quarter of 2020, according to the industry sources Sunday.

S-Oil said the company expects a recovery based on the increasing profitability of the company’s petrochemical products, including propylene oxide and polypropylene.

S-Oil noted the company plans to increase production capacity for propylene oxide through which the company managed to offset the weak refining margin in the last quarter.

S-Oil was the only refiner — among four local refiners in the nation — that avoided plunging into the red.

Increasing profitability of propylene oxide, in particular, helped the company, the firm said.

The price of propylene oxide per metric ton in the fourth quarter last year reached an all-time high since December 2014, increasing 85 percent to reach $1,098 from $595 in the previous quarter.

The refiner said it plans to add its production capacity for propylene oxide by 30,000-40,000 tons to maximize profits from the petrochemical product.

The company also anticipated a recovery in refining margins in the wake of the global rollout of COVID-19 vaccines, which will boost travel demand worldwide.

According to Meritz Securities here, S-Oil’s operating profit this year is expected to hit 1.02 trillion won, turning around from the operating loss of 1.08 trillion won in 2020.