HOUSTON (ICIS)–US October propylene contracts have settled at a 1.5 cent/lb increase by most market participants, although a producer did not settle its contracts at that level, market sources said on Monday.

The settlement follows a 7 cent/lb increase for September contract prices, which also was not marketwide.

The increase contract prices for October and September were largely driven by disruptions in the market following Hurricane Harvey, which made landfall on the US Gulf coast in late August.

Effects of the hurricane caused outages for olefins units and refineries along much of the Texas coast. Market sources also attributed the hurricane with delaying a new propane dehydrogenation (PDH) unit in the US Gulf, which had previously been expected to start up in September.

Propylene spot prices rose sharply in the wake of the hurricane, but have moderated slightly in late October as refineries and olefins plants have returned to service. However, some continued outages have kept pressure on the market through October.

Meanwhile, refinery operating rates remain below the 2017 pre-Harvey average of 92%, according to the latest data from the US Energy Information Administration, although rates have improved since immediately after the hurricane.

The new PDH unit in the US Gulf has been in commissioning phase, with market sources expecting it to produce on-spec propylene in early November. 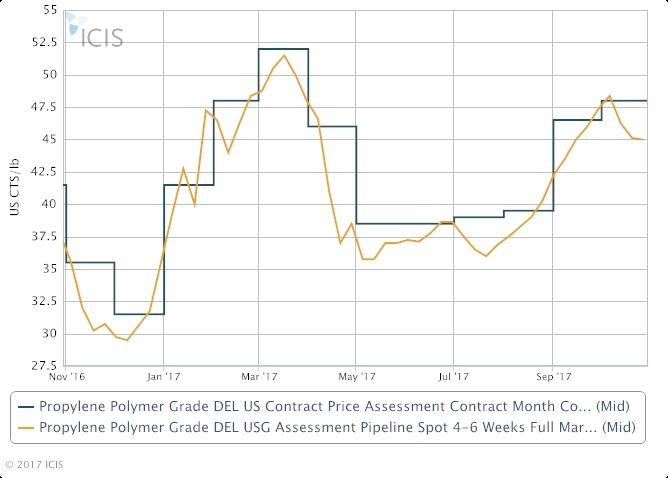