US Jan propylene yet to settle on buy-sell gap

HOUSTON (ICIS)–US propylene contracts for January have yet to settle as producers continue to target rollovers, while buyers are pushing hard for price reductions.

Nominations for polymer-grade propylene (PGP) and chemical-grade propylene (CGP) had emerged at rollovers to increases of 0.5 cents/lb, although early expectations were for January contracts to settle flat from the previous month.

Spot prices have been mostly steady throughout December and into January, which would provide some support for January contracts to remain unchanged from the previous month.

However, buyers are not willing to accept a rollover, with some said to be pushing for decreases of 0.5 cents/lb.

One source felt that propylene is overpriced by at least 10%, as crude oil values have moved down by more than 10% since the last time propylene contracts were settled, and as propane continues to be a favoured feedstock.

Another buyer said that propylene producers have margin expansion in both splitters and crackers and that this should be passed through to their downstream customers.

US December PGP contracts had settled at increases of 0.5 cents/lb, putting prices at 32 cents/lb ($705/tonne). 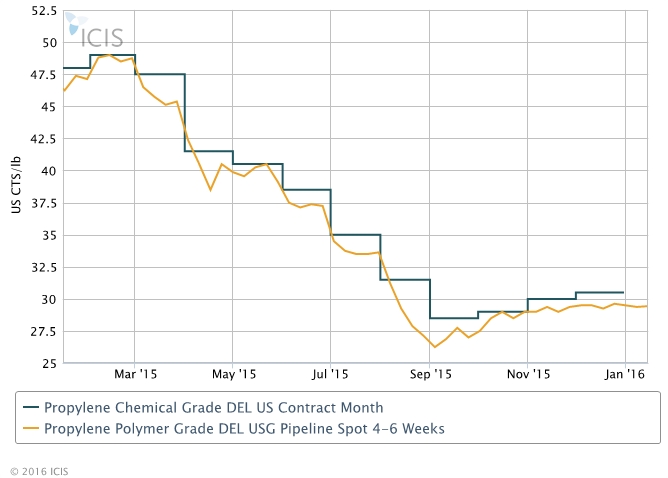