Front-month January polymer-grade propylene (PGP) was bid at 66 cents/lb ($1,455/tonne) against no offers on Thursday, up from the last trade at 62 cents/lb on 10 January.

Prices rose sharply this week as a PDH unit at Flint Hills Resources complex in Houston, Texas, was taken offline on Wednesday due to an upset. The outage is expected to be short, with the restart process already begun.

However, inventory levels for propylene have been low and issues with two other PDH units had further tightened the market in recent weeks.

A newly built PDH unit continues to ramp up after its start-up was delayed due to effects of Hurricane Harvey. The Enterprise unit at Mont Belvieu, Texas had previously been expected to start up in September.

An existing PDH unit at Dow’s complex in Freeport, Texas had shut down in late December. Market sources expect the unit could be offline for maintenance into early February.

While spot prices were generally firming in late 2017, prices have jumped sharply in the last two weeks. Spot prices are nearly 20 cents/lb higher than prior to Christmas, when PGP was assessed at 48.5 cents/lb.

However, the full effect may not be felt in January contract prices as most nominations had emerged prior to last week’s spike to 62 cents/lb.

Nominations remain at increases of 5-8 cents/lb, with some sources expecting a settlement closer to the high end of that range.

US propylene contracts typically settle in the middle of the month for the current month. 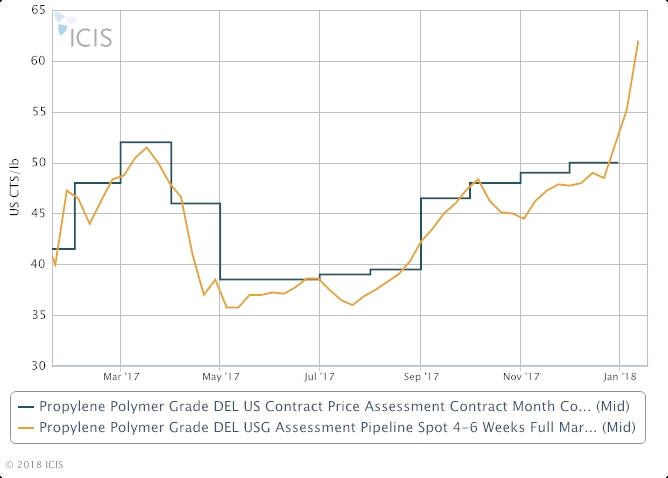