LONDON (ICIS)–Incremental improvements in demand for polyurethane (PU) products have slowed downward pressure on the Europe isocyanates and polyols markets where supply is abundant, and producers are now hoping for a reversal in the coming months.

June contracts for polyols, toluene diisocyanate (TDI), and crude and pure methylene diphenyl diisocyanate (MDI) were all settled below May contract levels, and in some cases at hit new record lows.

The industry is largely focused on lockdowns being lifted and what impact economic difficulties resulting from the coronavirus will have on consumer spending.

POLYOLS
Polyols contracts for June were assessed this week down €40/tonne at the lower end and down €50/tonne at the upper end of the range to €1,360-1,500/tonne on a free delivered (FD) basis in northwest Europe (NWE).

Sources quoted deals as low as €1,100/tonne FD NWE, however the bulk of feedback pointed to price reductions in mid-double-digit territory. 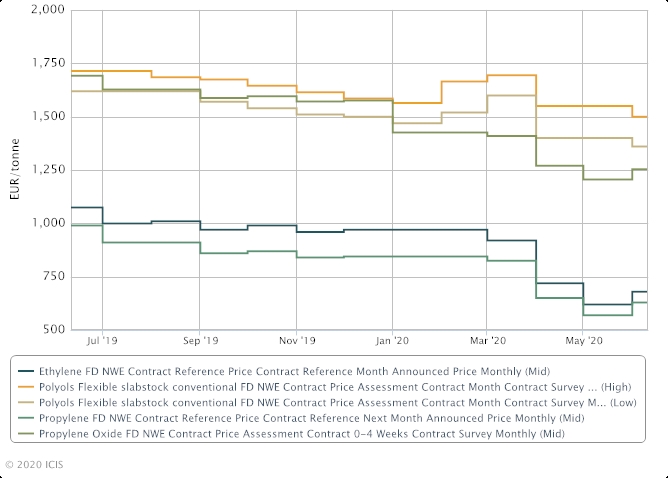 –
“All the producers cut prices with the hope of making business,” one Europe-based polyols buyer said.

“But at the moment, we cannot increase our volume.”

There was a broad range of feedback this month, depending on grade and application, with prices quoted as high as €1,500/tonne FD NWE in some cases.

The range is now at its lowest levels since September 2009.

“It’s disastrous, to be honest,” one Europe-based polyols producer said, referring to the increase in competition and in the base polyols market and recent low price levels.

Polyols producers are competing for market share in Europe, where demand has only marginally improved from May levels and remains significantly below levels seen in 2019.

“They don’t want to lose out,” a second Europe-based polyols buyer said, referring to producers.

“Maybe it’s not about losing out now but when volumes come back.”

The flexible foam market has seen some gains in demand as a result of coronavirus lockdowns being lifted.

FOAMS PROPS UP TDI
Demand for TDI used in flexible foam is improving, and some producers estimate June orders to be up to 20% below normal.

One Europe-based TDI producer said June orders were now at normal levels after a flurry of activity in the past week.

“They said they had to buy more because their stocks were already low in March and had to order more,” he said, referring to the recent increase in business.

Others were less optimistic about demand though.

“People are not going to shops. There’s no real enthusiasm in the market,” a Europe-based TDI buyer said.

Despite gains in demand, June TDI contracts were assessed this week dropping €50/tonne at the lower end and €70/tonne at the upper end of the range to €1,400-1,450/tonne FD W (west) Europe – the lowest level ICIS has on record. 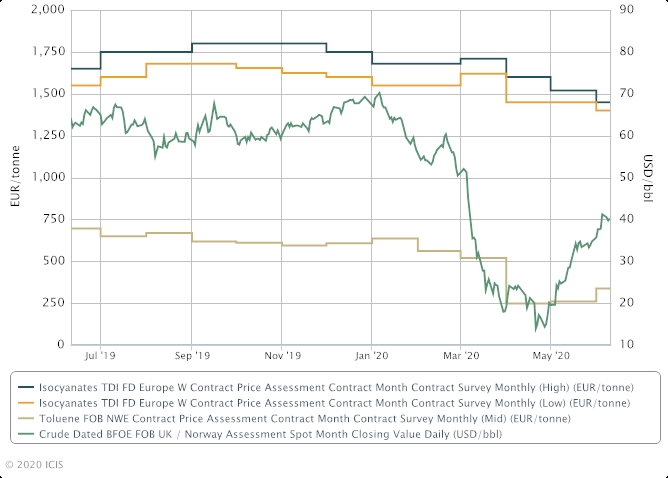 –
Some June deals were transacted for as little as €1,300/tonne FD W Europe, said sources, although most deals have been at higher levels.

Similarly, prices as high as €1,600/tonne FD W Europe were also quoted but did not represent the wider market.

TDI players are eyeing demand for consumer goods, bedding and furniture, which has increased in May and June although it is still well below levels in 2019.

Further weakness is also expected over the summer holiday period, although there are some expectations that delayed purchasing that would have taken place from March to May could now take place.

CRUDE MDI: MOST SECTORS IMPROVE
The crude MDI June contract was assessed this week dropping €20/tonne at the lower end and €30/tonne at the upper end of the range to €1,130-1,260/tonne FD W Europe, the lowest level ICIS has on record. 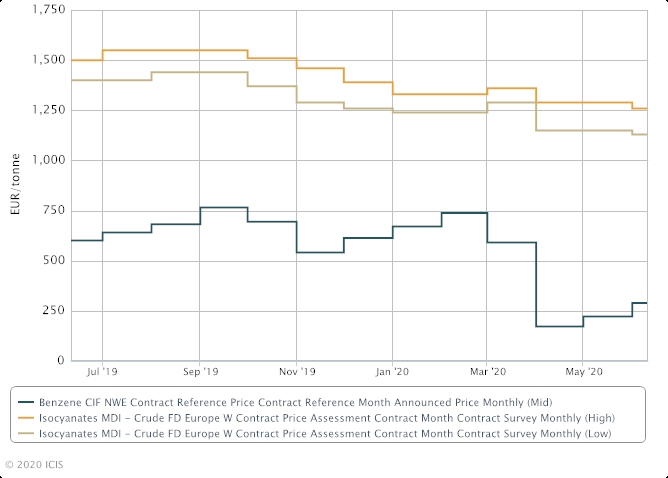 –
Demand for crude or polymeric MDI (PMDI) has been stabilising as demand for rigid insulation foams has been improving; some prices rolled over, sources said.

According to one Europe-based reseller, the construction market in NWE was now at 90% of activity, compared with this time in 2019.

Demand for adhesives and wood binding has also improved, as well as that for insulation panels and spray foam, among others.

In other cases, however, demand weakened, according to some players.

Absolute prices as low as €1,100/tonne FD W Europe were heard, but the bulk of feedback pointed to deals transacted above this level.

Reduced operating rates and an ongoing outage at the 200,000 tonne/year Covestro, Brunsbuettel plant have had no impact on availability, which remains abundant.

The MDI market is broadly exposed to the automotive sector, where demand has been hammered by the coronavirus pandemic and other factors.

PURE MDI: SLOW TO PICK UP
Pure or monomeric MDI (MMDI) contracts for June were assessed this week dropping €50/tonne at the upper and lower ends of the range to €1,550-1,800/tonne FD W Europe, the lowest level ICIS has on record. 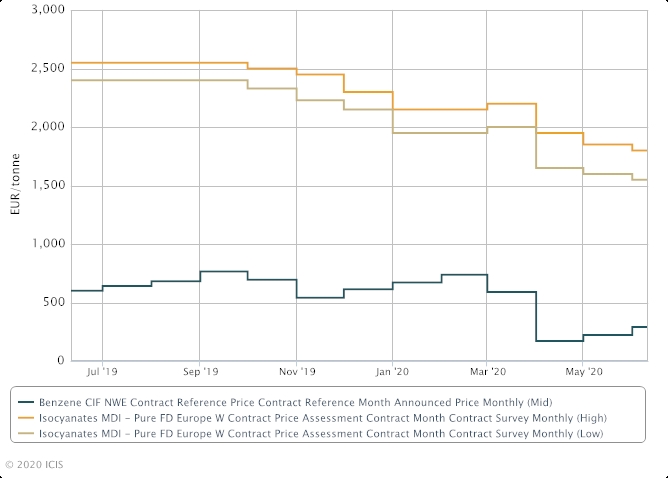 –
Deals transacted as low as €1,400/tonne FD W Europe were quoted but not believed to reflect the bulk of business.

The market had little activity this week; demand for MMDI for use in the automotive sector in Europe has declined significantly in recent months, while technical polyurethane applications that use MMDI have seen demand deteriorate more recently.

“You can’t get rid of pure MDI,” a Europe-based MMDI reseller said, referring to declines in demand in thermoplastic polyurethane (TPU), footwear and synthetic leather applications.

“The situation will probably only really improve after the summer holiday.”

Demand from the footwear sector has improved in some areas but remains fragile.

“It’s still a bit challenging because of the shoe sole industry. Demand is a little bit low,” one Europe-based MMDI producer said.