Pricing details of the sale were not immediately available, but some market sources said the cargoes were available at the equivalent of around $3,400/tonne CFR (cost and freight) GCC (Gulf Cooperation Council), which is at the low end of ICIS’ assessed prices in the week ended 26 October.

GCC PMDI prices are currently at their highest since ICIS began tracking the data in August 2011. 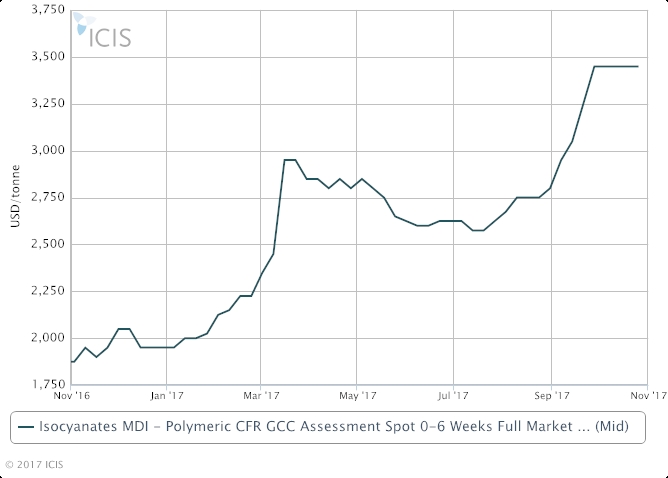 Saudi Arabia-based Sadara Chemical is a joint venture between US’s Dow Chemical and state energy firm Saudi Aramco. The company officially announced production of PMDI from its 400,000 tonne/year plant in Jubail in June.

By August, talk of Sadara’s PMDI cargoes were heard to have been shipped to China and distributed by Dow. But at the time, the actual origin of the material could not be verified.

In October, shipments of more than 3,000 tonnes were believed to have been lifted to destinations mainly in Asia. While some of the cargoes were originally meant for China and southeast (SE) Asia, some were also heard to have arrived in South Korea and Japan, market sources said.

More significantly, Sadara is also believed to have started delivering PMDI to customers in Saudi Arabia. The company’s plant is the first PMDI facility in Saudi Arabia.

The move into the Saudi market has been long awaited and marked the company’s early forays into its own home territory, a market that has in the past been largely supplied by northeast Asian or European producers.

The timing of the transactions is positive for Sadara, market players said, citing that Middle East PMDI prices have been on an uptrend over the last few months and have been at record highs for the last four weeks.

Supply from major Asian suppliers to the Middle East has also slowed to a trickle due to higher selling prices in China and other parts of Asia. 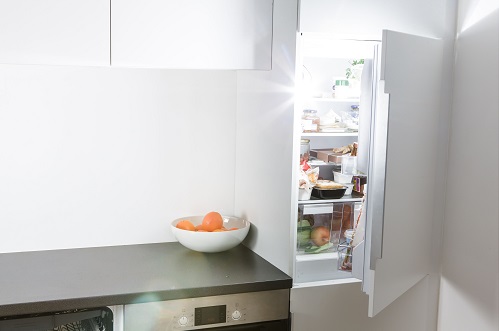 Whether or not Sadara’s additional supply would weigh prices down remains to be seen as demand in Asia and the Middle East has remained strong and with a number of Asian PMDI plants either currently undergoing scheduled maintenance or are due for turnaround within the next few months.

Meanwhile, sources close to Sadara said the company’s PMDI production facility was running well and “is reliable,” and that cargoes were being shipped “continuously” from the Saudi plant.

Sadara’s PMDI cargoes are being shipped bulk carriers, before they were locally repackaged in drums in some destination countries, market sources said.

“This is what we heard. They [Sadara] rented some huge tank in one of the ports and store it there [and] then proceed to drumming,” said one market source.

The PMDI cargoes from Sadara that arrive in China in bulk will be stored in two separate shore tanks located in the provinces of Guangdong and Shandong. They will then be delivered to domestic customers in bulk form from the tanks, a Chinese trader said.

Small quantities of Sadara’s PMDI cargoes are heard priced slightly lower than prevailing market prices but these are only for customers that previously took cargoes from the company at higher prices, the trader said.

Around 1,000 tonnes per month of Sadara’s PMDI have been arriving in China in the past few months, but the volume is expected to gradually increase from December onwards, market sources said.

Sadara’s PMDI production is part of its broader polyurethane (PU) industry supply chain in Jubail, Saudi Arabia. It started up its 400,000 tonne/year polyether polyols plant at the site in July, and in August, began production at its 200,000 tonne/year toluene di-isocyanate (TDI) unit. Commercial sales of Sadara’s TDI is expected in late-2017 or early-2018.

Isocyanates and polyols are used together in the manufacture of PU foam products.