Trade was limited early in the week, with several US market participants attending a petrochemical conference in Europe, and prices began the week lower than the close of last week. However, benzene prices recovered at mid-week as upstream crude oil futures firmed.

Benzene prices had been moving lower through September after limited imports and domestic production had pushed prices higher through the summer months.

Benzene prices marked a high point for 2016 in late August as supply was tight. In September, as import levels improved and on-purpose production increased, benzene prices moved lower throughout the month and the October contract price settled last week at a sharp decline to the prior month. 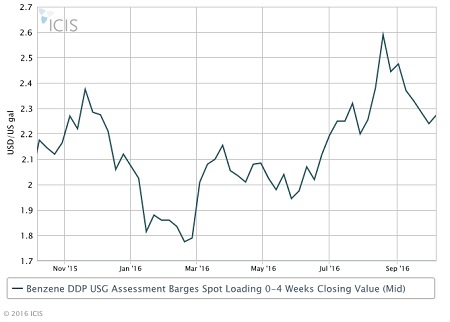