US spot ethylene falls to 16-year low amid tariff concerns

HOUSTON (ICIS)–US spot ethylene traded at a 16-year low on Friday amid long supply and concerns about proposed Chinese tariffs on chemicals.

Ethylene values had been trending lower in the first quarter as supply had outpaced demand. Good production and new cracker capacity had outweighed consumption amid a slow ramp-up for new downstream polyethylene (PE) capacity and production issues for existing PE plants.

However, China’s inclusion of some grades of PE in proposed tariffs had stoked fears that planned expansions in ethylene and PE would leave ethylene oversupplied.

Much of the new capacity for ethylene and PE is being built on the premise of exporting the PE to capitalise on the advantage of low-cost ethane feedstocks in the US.

Domestic demand growth is not expected to be able to absorb the increased capacity. Asian markets, particularly China, have been expected to be the primary targets for US PE exports.

Spot ethylene traded at 16.00 cents/lb earlier this week, falling to levels from mid-March when prices hit a nine-year low. 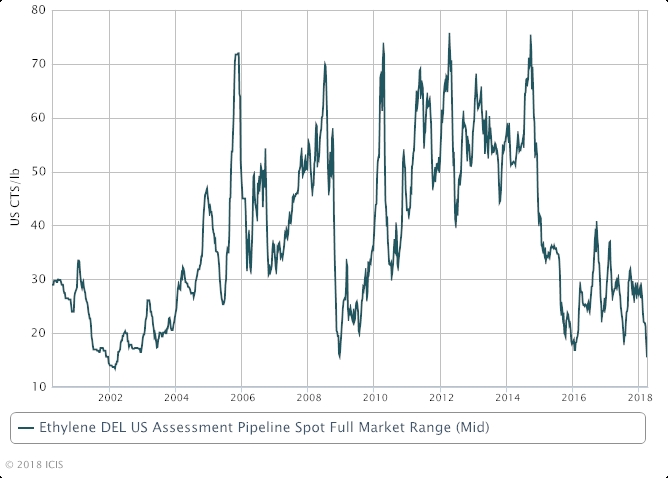