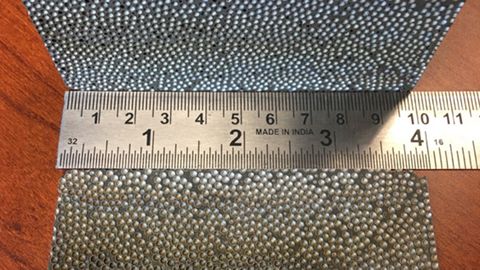 Airplane wings are made out of a specific type of aluminum, an alloy that offers a combination of lightness and strength comparable to steel that makes for easy flying. But scientists from North Carolina State University are investigating what might be an even better material: a combination of epoxy resin and what’s known as steel composite metal foam, or CMF.

“We call our hybrid material ‘infused CMF,’” says Afsaneh Rabiei, corresponding author of a paper on the work and a professor of mechanical and aerospace engineering at NC State, in a press statement. “And while infused CMF is about the same weight as aluminum, it is tougher and has other characteristics that make it more appealing from a flight performance, safety and fuel efficiency standpoint.”

Metal foam resembles any other type of foam, with hollow gas-filled spherical pores taking up much of the volume. The only difference is its cellular structure is made out of metal.

The foam used here was a steel-steel CMF, meaning both its hollow pores and matrix were made of steel. Steel-steel CMF is a sturdy material, capable of withstanding .50 caliber rounds, temperatures as high as 800 degrees Celsius, and even explosive incendiary devices as close as 18 inches away.

The NC State team makes the material by immersing the steel-steel CMF within a hydrophobic epoxy resin and then using vacuum forces to draw the resin into both the hollow spheres and smaller pores. Approximately 88 percent of the CMF’s pores end up filled with the epoxy resin, which acts as a hardening glue on the material.

The researchers tested their material against aerospace-grade aluminum in three categories: “contact angle, which determines how quickly water streams off of a material; insect adhesion, or how well bug parts stuck to the material; and particle wear, or how well the material stands up to erosion,” they say in their press statement.

Contact angle with water is crucial for planes as they fly through inclement weather. Water buildup on wings can weigh a plane down and lower a wing’s ability to perform overall. Testing showed the infused CMF had a contact angle 130 percent higher than its competition, a noticeable improvement.

Like water, insect residue is one of those inevitable parts of flying that can build up over time. It’s measured in two different ways: There’s the sheer height of the dead insect residue as it piles up on the wing, and how far the inspects have spread over the wing. The steel-steel CMF was able to outperform standard wings on both measures, with 60 percent less in maximum height, and by 30 percent in terms of surface area.

And then there’s the condition that eventually affects every material: erosion. The team blasted the CMF with grit to better understand out how it could handle erosion. While the grit blast did increase the material’s roughness, it had a contact angle 50 percent better than aluminum.

“Aluminum is currently the material of choice for making the leading edge of fixed-wing and rotary-wing aircraft wings,” Rabiei says. “Our results suggest that infused CMF may be a valuable replacement, offering better performance at the same weight.

“By the same token, the results suggest that we could use different materials for the matrix or spheres to create a combination that performs as well as conventional aluminum at a fraction of the weight. Either way, you’re improving performance and fuel efficiency.”