Commentary: Strong earnings on tap for US and European chemicals

“We expect a benign earnings season, albeit one that will not shed much light. Upstream chemicals are under pressure, but it is too early to tell whether downstream chemical companies can hold onto their near-term margin gains,” said Jefferies analyst Laurence Alexander.

The analyst sees companies expressing caution on US auto production and relative optimism on trends in Europe and Asia. He also notes that optimism on US tax reform, as well as infrastructure spending have largely disappeared.

“We expect companies to remain more cautious than investor sentiment on 2017 (even those enjoying feedstock tailwinds), citing limited prospects for end-market acceleration and challenges to productivity this late in the cycle.

While the momentum in leading indicators appears to be starting to stall, overall the backdrop remains benign,” said Alexander.

He cites improving trends in both chemical shipments and inventory levels, and capital spending continuing to be less than depreciation and amortisation, boding well for future supply/demand balances. 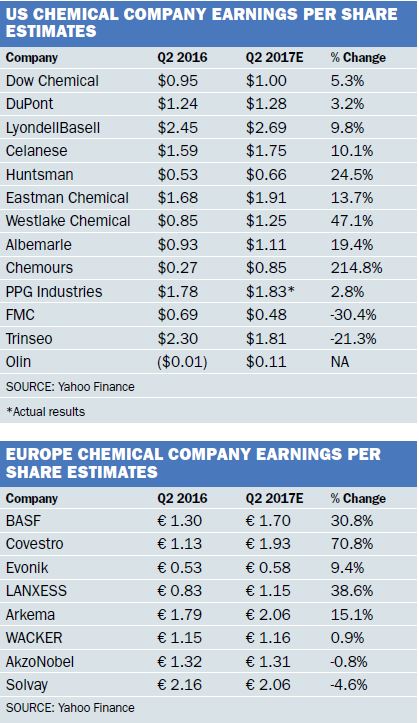 On the commodity petrochemical side, UBS analyst John Roberts covering US chemicals remains concerned about integrated polyethylene (PE) margins declining in late 2017 amid new capacity and the impact of persistently lower crude oil prices. The analyst is “neutral-to-positive longer term” on vinyls, and more positive on diversified chemicals with Dow/DuPont showing growth and likely able to achieve meaningful cost savings.

He notes that titanium dioxide (TiO2) producers should continue seeing pricing momentum as price increases were successfully implemented in Q2, particularly in Europe.

However, Roberts sees prices likely peaking in late 2017/early 2018 and is thus cautious on the 2018 outlook for the white pigment.

“We see volumes and demand remaining positive and sense that the sector can see a good H2 after several years of missed expectations when demand came up short.”

Andrew Stott, UBS analyst covering Europe chemicals, notes that the energy drag is “not enough to douse growth… We see that expectations for Q2 remain strong in many end-markets despite a particularly strong Q1 for many, Q2 delivering the worst quarter for the oil price since 2015 and the acknowledgment that H2 comps may be tough.”