Dusseldorf, GERMANY (ICIS)–Toluene diisocyanate (TDI) pricing has bottomed out, at close to a record low, but there is little expectation for a rebound in the near future, according to the CFO of Germany-headquartered producer Covestro.

Demand for the polyurethane (PU) has been hit by macroeconomic weakness as well as seasonal factors at the start of the year, with pricing depressed for over a year now.

January Europe pricing fell by double-digits, with discounts of up to €90/tonne reported month on month and a range of €1,550-1,680/tonne FD (free delivered) W (west) Europe, close to a 14-year low.

“With TDI, here we really have hit bottom with margins that are probably close to a historical low,” said Covestro CFO Thomas Toepfer.

Even a lengthy maintenance shutdown for Europe’s largest TDI production facility – BASF’s Ludwigshafen, Germany, unit, which was taken offline in September – failed to significantly influence pricing, with material flowing into the region from South Korea and the US.

BASF’s TDI unit is back online, according to sources, but pricing is so low at present that it is difficult to imagine further falls, according to Toepfer.

“Some of our competitors are losing cash with every tonne they produce;b [we] believe there is not much room for prices to decline,” he said.

Despite the limited capacity for additional price falls, market conditions are such that no substantial uptick in pricing is expected in the near future, he added.

“We see overcapacity, and we don’t think anything is going to change in the near future … There is likely to be continued pressure on margins,” Topefer said.
– 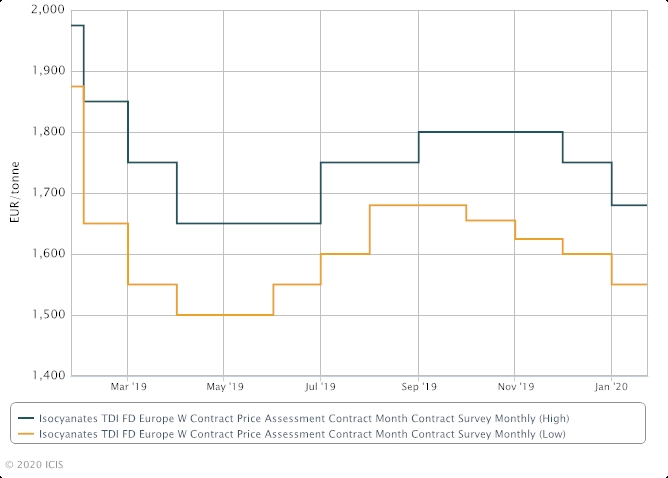 –
TDI is mainly used for the production of PU flexible foams used in upholstery, mattresses and automotive seats.