Robocalls—those pre-recorded, unwanted phone calls—are at a record high. WSJ’s Joanna Stern explains how you can fight back against them, and why it matters. Photo: Drew Evans/The Wall Street Journal.

“This is a final notice from the IRS. The nature and purpose of this call is to inform you we have received legal petition notice concerning a tax fraud against you. Before this matter goes to the federal claims courthouse or before you get arrested, please call immediately.”

The first time I was greeted by that uplifting automated call on my iPhone I shrugged it off. The second time, I actually worried I might have unknowingly pulled a Martha Stewart. The third, fourth and 10th times, I was furious these low-life scammers wouldn’t leave me alone.

We are in the midst of a robot apocalypse. Instead of wiping us out with liquid metal lasers guns, they’re crushing us with robocalls, those unwanted, pre-recorded intrusions into our private lives. You’re not safe anywhere, not even on your once-sacred smartphone. 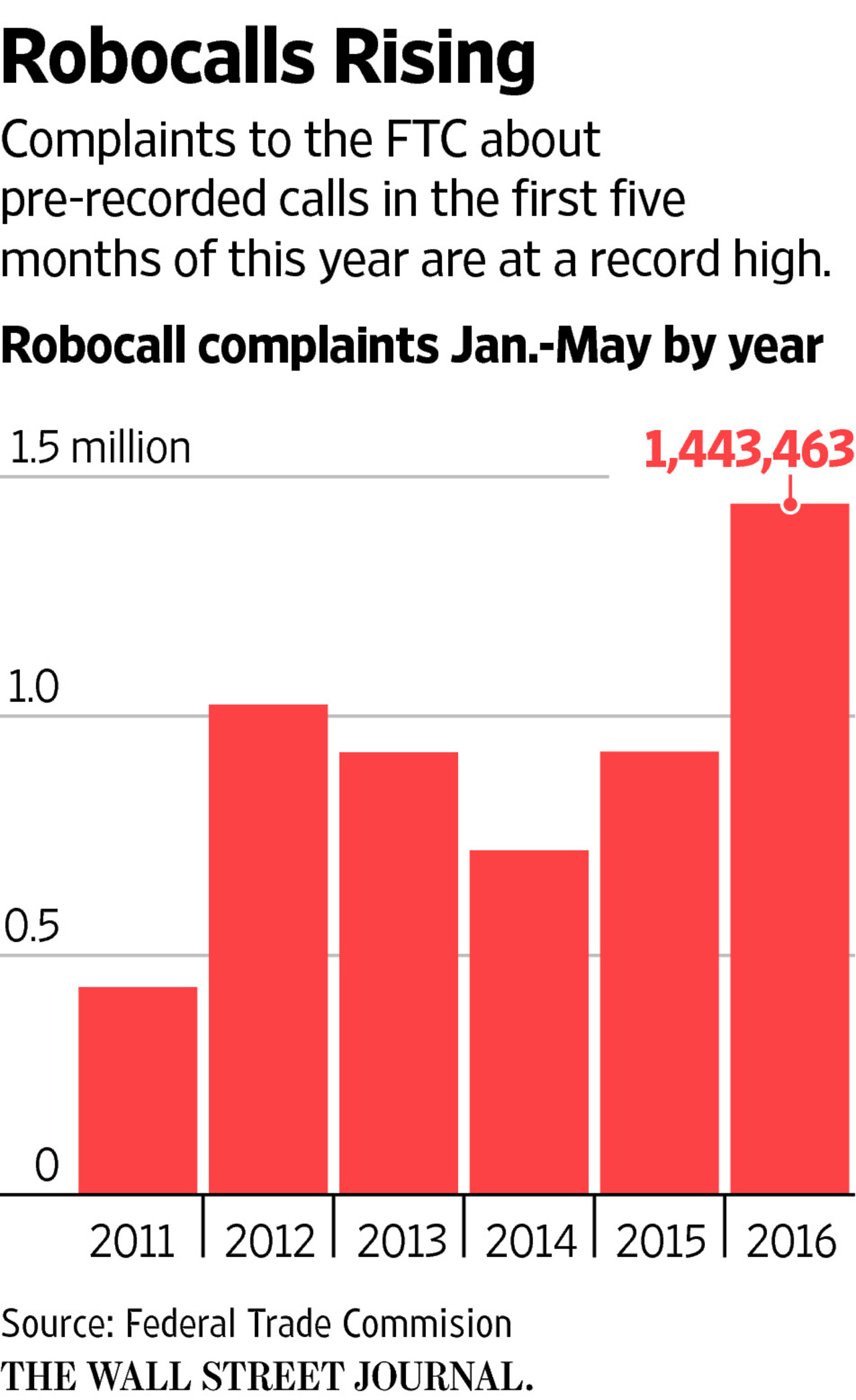 I’m not talking about legal calls from the pharmacy about a prescription, or the school announcing a snow day. I’m talking about illegal ones, often scams, that promise free cruises, debt relief, easy money and many more little slices of the American dream.

Over 10 billion robocalls have been placed to U.S. phones since the start of 2016, according to YouMail, a provider of cloud-based telecom services including call blocking. Complaints to the Federal Trade Commission about them are up nearly 50% since last year. Tax scams like the one I received are also up this year, according to the real IRS, and have netted the bad guys over $40 million since October 2013.

It’s easy to say the robots have won. It’s easy to get angry at those who don’t seem to be doing enough about it. Regulatory agencies aren’t catching the perps fast enough. Lawmakers say a lot but don’t do enough. Those sleeping giants, the telecoms, don’t seem to be in a hurry to wake up and squash the problem. Yet the rise in robocall frequency is putting pressure on them all. Meanwhile we mere mortals are finding our own ways to fight back.

Why my cellphone? I can understand targeting publicly listed home numbers, but I have never shared my mobile number online or handed it to some shady shopping site or payday lending service.

Katherine Hutt, at the Better Business Bureau, suggested doing a Google search of my cell number. You should, too. It appears on various sites—without my name but alongside hundreds of other phone numbers from the same area code. Scammers and telemarketers could have scraped these number lists, says Ms. Hutt.

The real reason for the recent robocall barrage? Technology. It’s so easy—and cheap—for scammers to dial thousands of numbers that they’re simply hitting more of us. They plug lists of phone numbers into software and fire off calls over the internet. The software also makes it easy to “spoof” numbers, falsifying caller-ID information so callers, even out of the country, can disguise their identity or location. Tax fraudsters even spoof the IRS’s own toll-free number.

This past Sunday night at dinner time, eight of my friends and family members all got the same robocall. It was annoying. And it was from me. All it took was a little googling to find a service to blast the calls. At least I warned them that there’s no such thing as a free cruise!

The Call-Em-All software I used required me to confirm that I was abiding by the law. It is illegal to make nonemergency robocalls, both telemarketing and informational, to any cellphone without the permission of the consumer. Yet you aren’t likely to be thrown in jail for making the calls; enforcement usually takes the form of civil violations punishable by fines. It’s an old-school way to fight a high-tech menace, and it’s hard to tell if it is working.

Once upon a time, the FTC rode to the rescue with its magical National Do Not Call list. Those of us who put our numbers on the list—and you really should—only get some respite from unwanted telemarketing calls, however. In my own informal poll of about 400 Wall Street Journal readers, three-quarters said they still get calls despite being on the registry. Legitimate companies keep away, but scammers couldn’t care less.

Outsmarting the phone-spamming robots isn’t as easy as installing a spam filter, so here’s your best plan of action:

ENLARGE
Hiya, available for iOS and Android, allows you to blacklist calls from scammers. Photo: Hiya

When robots call, don’t answer. Experts from the FTC and Federal Communications Commission told me that letting the systems know you’re a real person may get your number placed on a more valuable list of confirmed live humans. If you don’t recognize an incoming number, let it go to voice mail. If you pick up then realize it’s a robocall, just hang up.

Look up the number and report it. Copy the suspicious phone number and do a reverse lookup with an app like Hiya. A spinoff of Whitepages.com, Hiya has a large database of numbers used by scammers—much of it based on community reports. If you know it’s a scam number, report it in the app, then file an FTC complaint. The FTC says this aids in investigations.

Use a call-blocking service. Apps like Hiya, Truecaller and Nomorobo can alert you when a scammer calls, checking the incoming number against databases of phone numbers commonly used by illegal robocallers. On an iPhone, Hiya and Truecaller download their whole database to your address book—annoyingly, this might get synced across all your devices. That’s why I prefer Nomorobo, even at $5 a month.

Nomorobo creates a separate address book that updates every 15 minutes with the latest scammer digits. It has the best answer to fighting spoofed numbers as well. Previously available only on some home phones, the service tracks when a chunk of its customers are getting calls from the same number, then bans that number temporarily. It isn’t perfect, but its creator, Aaron Foss, says its 3% error rate is improving over time. Nomorobo, currently in a closed beta for smartphones, will be available to all in August. 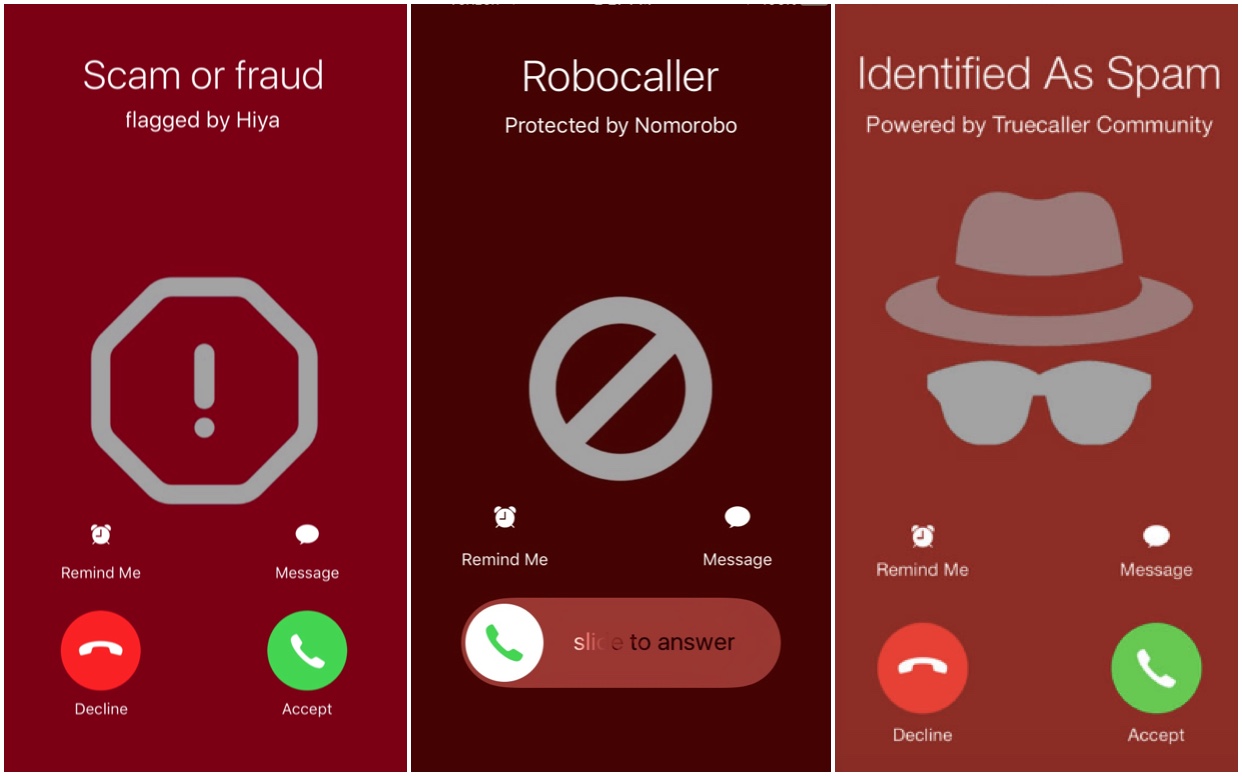 Update your phone. Android devices currently allow pretty deep call blocking. This fall, Apple’s upcoming iOS 10 software will give iPhones new powers, too. You can already block numbers so that a caller goes straight to voice mail, but soon apps will be able to block callers in bulk—without dumping numbers into your address book to do it.

The Ammo of the Future

What if scammer calls could be intercepted at the network level? The FCC and FTC are hoping that’s what wireless carriers will do. Last June, the FCC said carriers could legally block robocalls and automated text messages, if asked by a customer.

The Telemarketing Guard from Canadian carrier Primus is the best example of how something like this would work. If a home-phone customer chooses to enable it, blacklisted numbers are challenged by Primus’s own robots before the phone ever rings. Time Warner, Verizon Fios, AT&T U-Verse and others have started offering Nomorobo to their home-phone customers.

Officials say U.S. wireless carriers have been slow to move. Currently, they put the onus of call blocking on users and phone makers. The problem with network-wide blocking is that you may miss calls you actually want, says Scott Bergmann, vice president for regulatory affairs for CTIA Wireless Association, the industry’s consortium. Verizon, T-Mobile and AT&T said they are constantly assessing new technology, but wouldn’t elaborate further.

Pressure from consumers and elected officials may give them an extra kick in the pants. Earlier this month U.S. Sen. Charles Schumer (D., N.Y) teamed up with Rep. Jackie Speier (D., Calif.) to introduced a bill that would require phone companies to provide consumers with free services that block calls. Over 600,000 consumers have also signed the Consumers Union’s petition to phone company CEOs to offer tools to block robocalls before they hit their phone.

Yes, as the FTC and FCC promise to crack down on more culprits and pressure is applied to the carriers to do more, we’re plagued by incoming robocalls. At least my persistent IRS scammers now go straight to voice mail jail.

Write to Joanna Stern at joanna.stern@wsj.com