NEW YORK (ICIS)–As the third round of US-China tariffs looms, China finished plastics products will be in the crosshairs, along with additional US exports of commodity chemicals.

The proposed third round of tariffs, which the US plans to put on an additional $200bn in Chinese imports, and China on $60bn of US imports, raises the stakes in chemicals and plastics.

While the second round on $16bn in imports on both sides already in effect since 23 August impacted around $2.0bn in US chemicals and plastics exports and $2.2bn in China’s, round three targets another $8.8bn in US exports of these products, and $16.3bn in China exports, according to the American Chemistry Council (ACC). 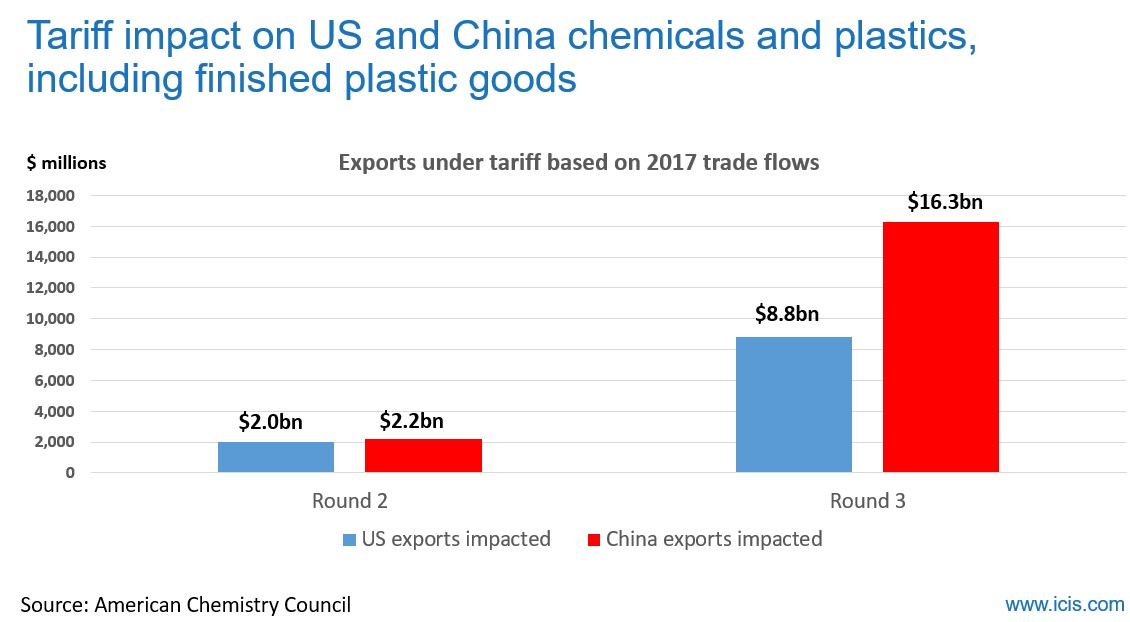 The first round of tariffs from the US and China on $34bn of imports implemented on 5 July did not include chemicals.

The bulk of the US tariffs in the third round target China’s finished plastics products, In round two, about $1.4bn in these exports were put under tariff. In round three this jumps to $5.8bn, according to an ICIS analysis of 2017 US International Trade Commission (USITC) statistics.

The products under tariff in rounds two and three include everything from plastic tubes, pipes and hoses, plates, sheets, films, containers, bags and sacks, lids and caps, to  wall, ceiling and floor coverings, and gloves and ponchos. 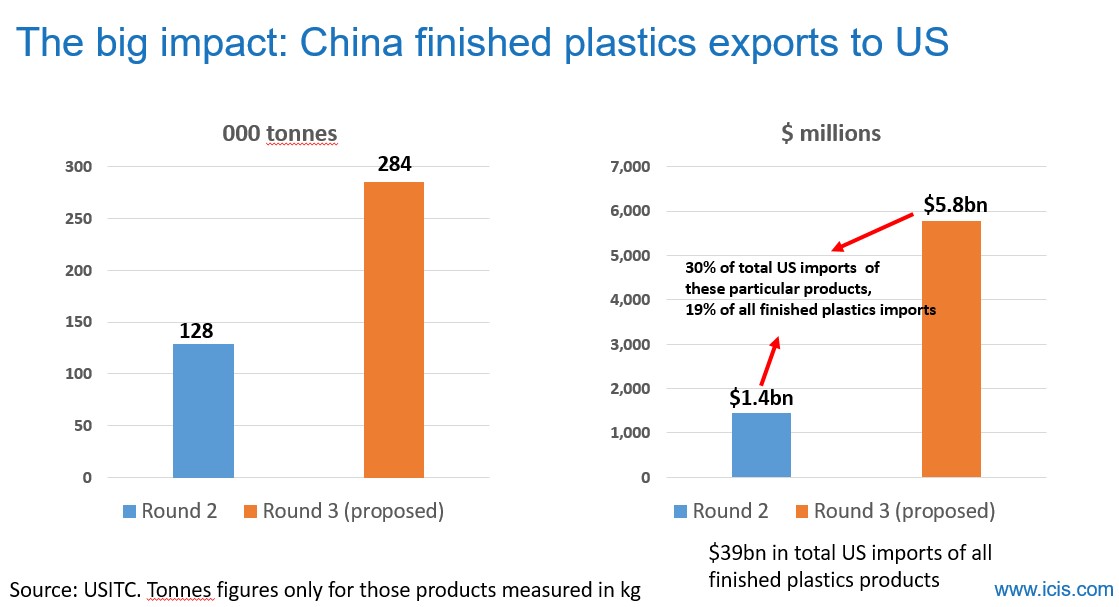 In volumes, for the finished plastics products where China exports to the US are measured in kilograms, the second round captured 128,000 tonnes while this amount more than doubles to 284,000 tonnes in the third round. This could diminish China’s overall demand for polymer resins.

BULK CHEMICALS IMPACT
In the second round of China’s retaliatory tariffs already in effect, the US bulk chemicals and polymers most impacted in terms of trade volumes to China are ethylene dichloride (EDC), styrene, high density polyethylene (HDPE), linear low density PE (LLDPE), monoethylene glycol (MEG) and polypropylene (PP) in that order, according to an analysis of trade statistics in the ICIS Supply and Demand Database. 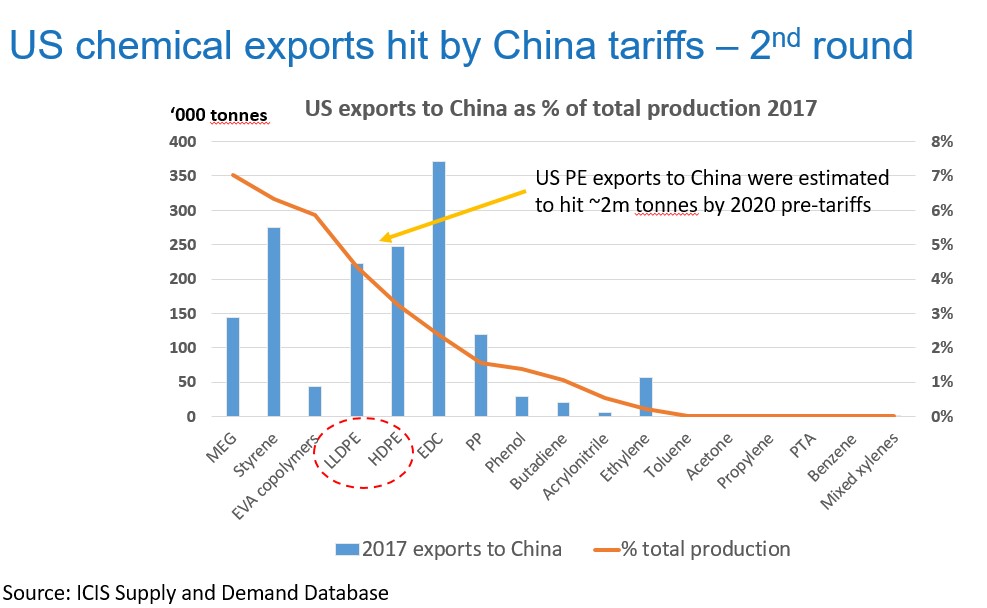 In contrast, the impact of US tariffs on China’s commodity chemicals and polymers exports to the US are minimal in the second round at under 10,000 tonnes per product in 2017. This compares to US exports to China of 371,000 tonnes of EDC and almost 500,000 tonnes of HDPE and LLDPE combined last year.

In round three, US exports to China most impacted in terms of volume would be paraxylene (PX), ethylbenzene and methanol. But the overall impact on commodity chemicals would be less than in the second round. 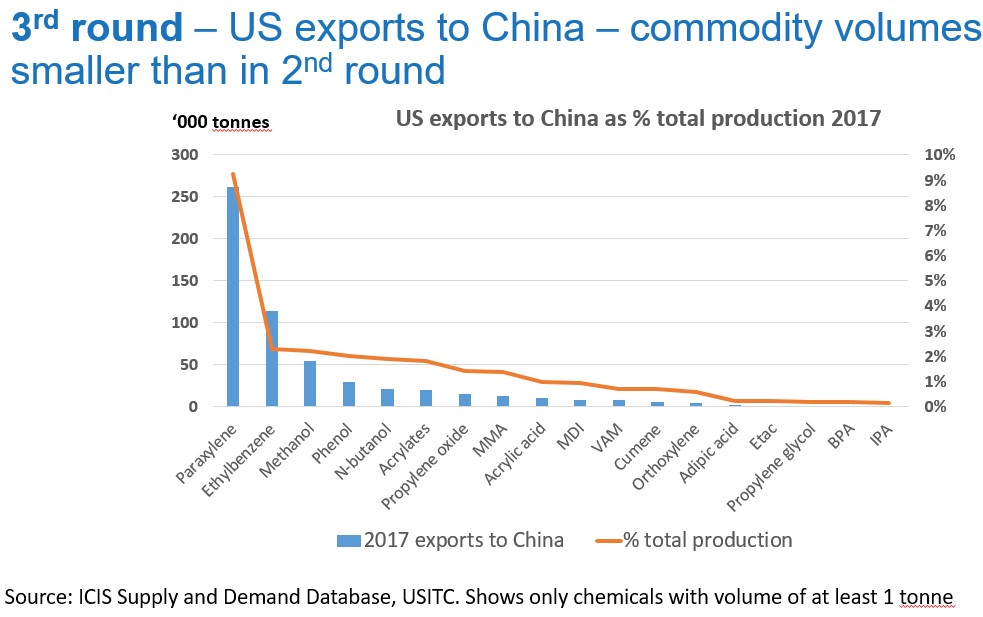 For China bulk chemical exports to the US, the third round would be somewhat more impactful than the second round, but still relatively minimal. Notable products affected would include acrylic acid, acrylates, acetic acid, toluene diisocyanate (TDI) and vinyl acetate monomer (VAM). 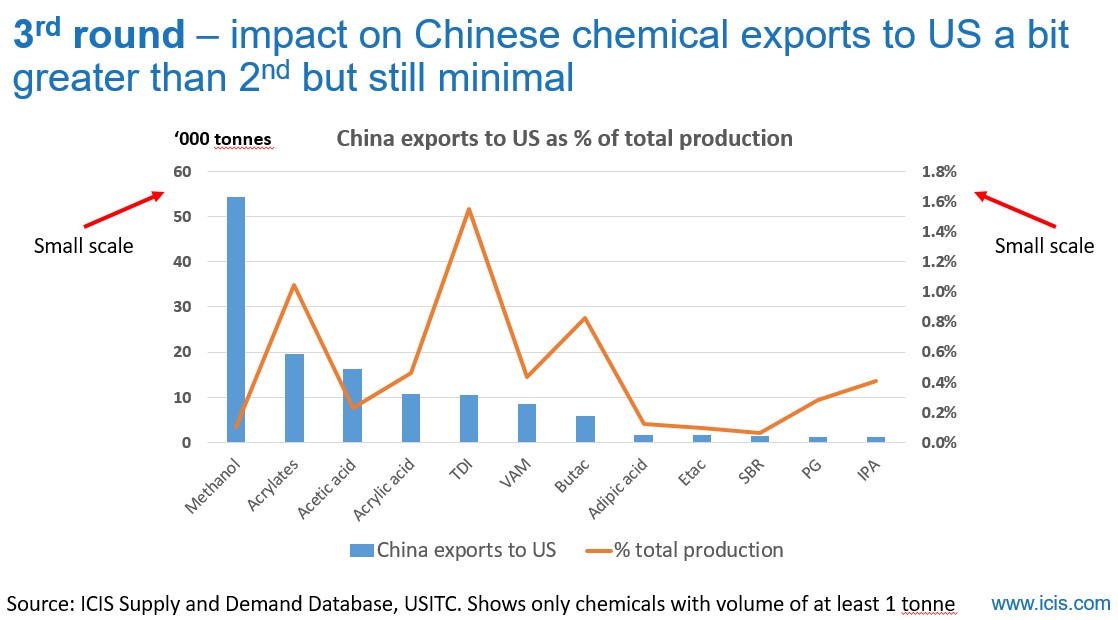 While methanol would be the largest China chemical export to the US under tariff in round three by volume, the US and China shipped more or less an equal amount of methanol to each other last year.

US LOCAL MARKET IMPACT
Even if overall volumes of bulk chemicals from China to the US under tariff are relatively small, it can have a significant impact on US buyers of these chemicals. 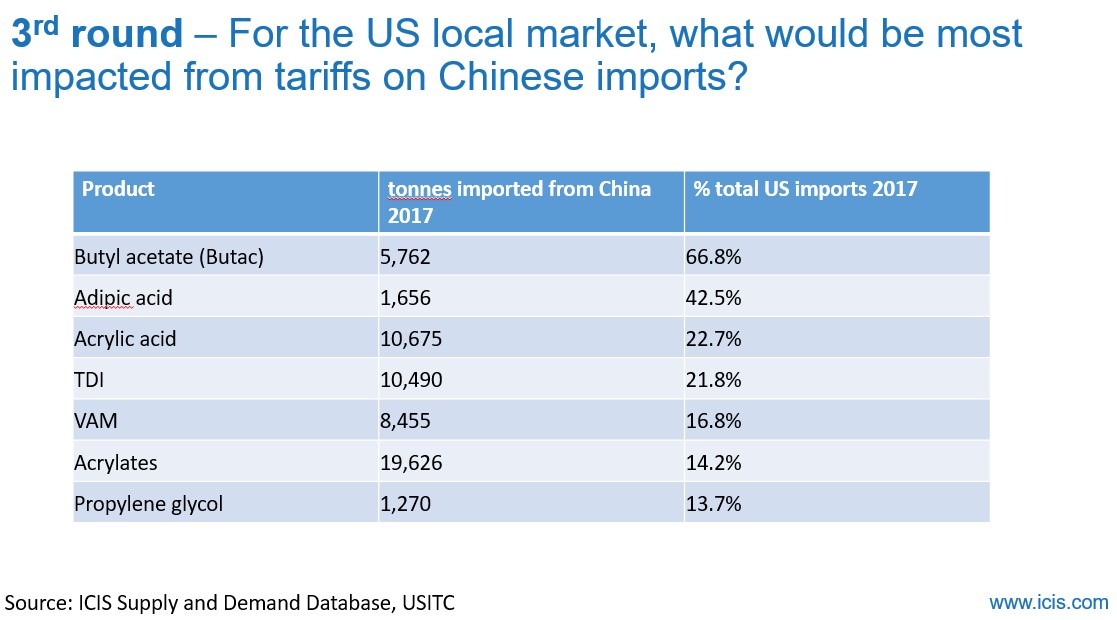 And of course, there are plenty of specialty chemicals and materials impacted by the tariffs. For example, proposed US tariffs on China rare earths in the third round pose a problem for producers of fluid catalytic cracking (FCC) catalysts.

The ACC is increasingly concerned about potential escalation in the US-China trade war, and is seeking certain exemptions for its members through the Miscellaneous Tariff Act Bill of 2018 which would reduce or eliminate tariffs on products not made in the US.

This bipartisan legislation passed the House of Representatives and was previously amended in the Senate.

“US manufacturers often rely on inputs that are not available or made in the US to create products that cost less, yet perform at the high level our downstream customers have come to expect from us,” said the ACC in a 4 September statement.

For more coverage of the US-China trade war, visit our ICIS landing page on this topic