One of seven rail cars that derailed Wednesday, Nov. 7, in Santa Fe Springs carried about 500 gallons of a hazardous material but it did not spill.

No injuries or evacuations were reported from the accident that occurred about 9:30 a.m. underneath the Slauson Avenue overpass, west of the 605 Freeway. The derailment happened in the Santa Fe Springs area, not in Pico Rivera as initially reported.

The lines of two railroads, Union Pacific and BNSF, will be closed in the area until repairs are completed.

Los Angeles County Fire Capt. Tony Imbrenda said one of the cars was carrying a tank with an estimated 500 gallons of toluene diisocyanate. It did not leak and there was no respiratory hazard, Imbrenda added.

He said it was a residual tank so it was not carrying a full load.

“The tank car was one of the major concerns,” Imbrenda said. He called toluene diisocyanate a serious health hazard.

The federal Environmental Protection Agency says toluene diisocyanate is used in the production of polyurethanes and consumer products, such as coatings, elastomers, adhesives, and sealants, and can cause skin and lung sensitization among workers.

Students in two nearby schools stayed in their classrooms as a precaution until the school day ended, Union Pacific spokeswoman Hannah Bolte said. 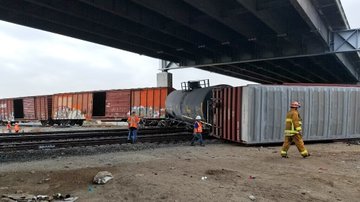 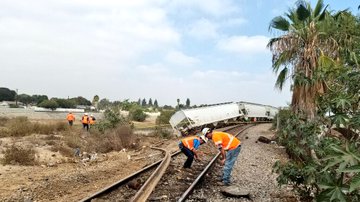 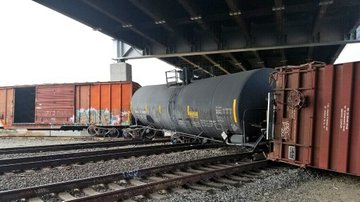 The fire department said there was no public threat from the derailment. It sent hazardous-material and urban-search-and-rescue teams to the site.

The derailed cars were part of a 59-car freight train, and the accident took place at the intersection of Union Pacific and BNSF tracks, Bolte said. She said the two railroads will investigate the cause of the derailment.

Both lines were closed until the damaged cars were removed and the tracks cleared for use, she said. Union Pacific crews brought in heavy equipment to move the damaged cars.

There was no time estimate for when the tracks would be back in service.

“Crews are working as quickly and as safely as they can, but we don’t have a time frame,” she said.

She said the railroad had also sent its hazardous-materials team to the scene. The railroad started clearing the area at about 12:20 p.m. to begin removal of the derailed cars, she said.

The Orange County Line was closed between Union Station in downtown Los Angeles and the Norwalk/Santa Fe Springs Station, said Michael Atchue, spokesman for Metrolink. Because of this closure, riders who were hoping to travel south from downtown Los Angeles into Orange County or ultimately San Diego County, were forced to take alternate lines east into Riverside or San Bernardino County and then from there, back south.

The 91/Perris Valley line was also shut down, effecting riders who wanted to go from downtown Los Angeles into parts of Riverside County, Atchue said.

Buses and alternate train routes were made available to riders.

“We used as many shortcuts we could find and we were utilizing those type of lines,” Atchue said.

Riders who hoped to travel north from San Diego County or Orange County taking the Inland Empire-Orange County Line, Atchue said, were also impacted due to the heavy delays at the Norwalk/Sante Fe Springs Station.

Amtrak also warned of delays caused by the derailment for its Pacific Surfliner service.

Olivia Irvin, spokeswoman for Amtrak, said all rail traffic between Fullerton and Los Angeles was temporarily suspended due to the train derailment.