By Todd Maiden of FreightWaves,

Supply headwinds facing the trucking industry were front and center at an investor conference on Wednesday and Thursday. While executives said driver recruiting and broader supply chain bottlenecks are ever so slightly easing, the procurement of equipment has gotten tougher.

“I would predict at this juncture, in our looking out at the trailer OEMs (original equipment manufacturers) and the tractor OEMs, that it could even be more difficult in 2022 on production and delivery than it was in 2021,” said Mark Rourke, CEO and president of Schneider National, at the Stephens Annual Investment Conference held in Nashville, Tennessee. 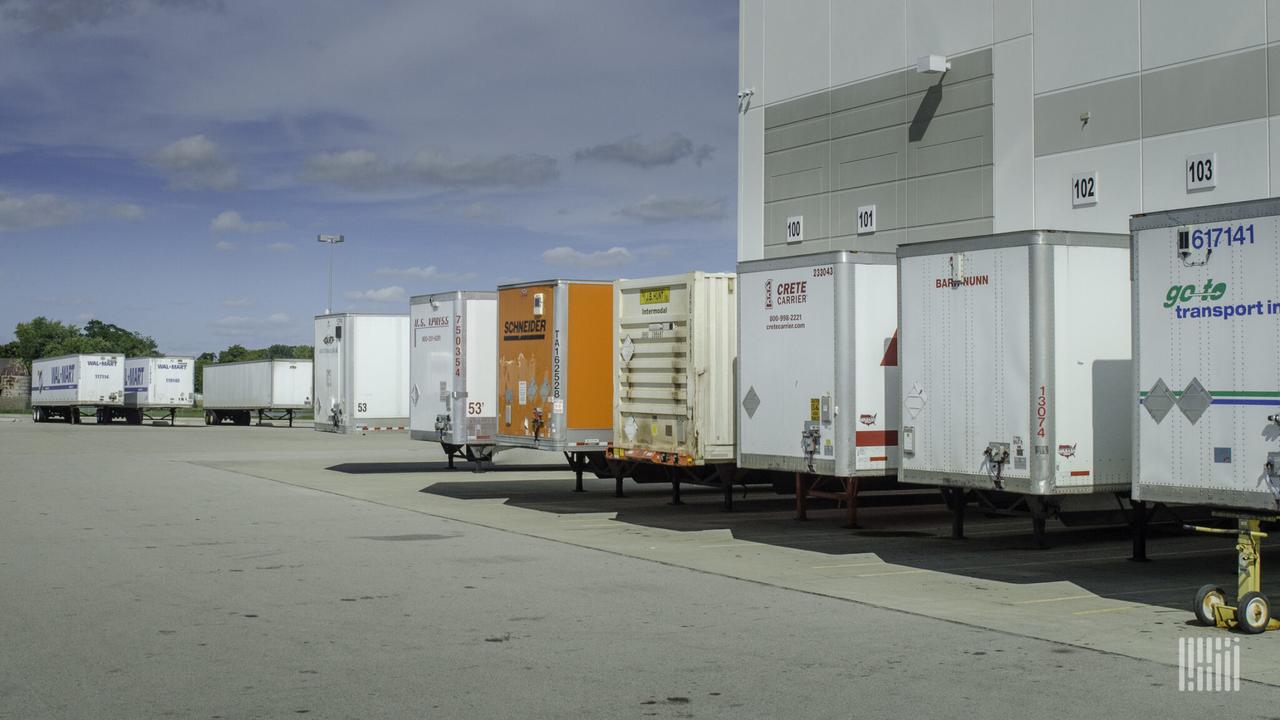 Finding trailers won’t get any easier in 2022 (Photo: Jim Allen/FreightWaves)

Equipment purchasing for truckload carriers will be below normal replacement in 2021 given semiconductor and parts shortages as well as COVID-related labor issues that are plaguing the OEMs.

Derek Leathers, Werner Enterprises chairman, president and CEO, said current tractor and trailer orderbooks extend well beyond the OEMs’ manufacturing capacity for all of next year, meaning the industry fleet, which has gotten older and smaller during the pandemic, won’t be increasing anytime soon.

“I think you see continued contraction or at best case stabilization in ’22 but with an older fleet,” Leathers said.

Werner’s average truck age was 1.8 years heading into the pandemic with trailers 4 years old on average. While a recent acquisition skewed average ages slightly higher, an inability to get all of the replacement equipment wanted has really pushed those averages up, to 2.1 years and 4.4 years, respectively.

Leathers said Werner wants to refresh equipment but “there’s no line of sight to when that moment is, it’s certainly not in ’22.”

“The best-case scenario is you may see some return to normalcy by third quarter ’22 and that’s way too late to have any impact on the year in terms of additional capacity. So I think we have a structural cap that’s different than anything we’ve seen historically.”

Eric Fuller, president and CEO at U.S. Xpress, also pointed to the third quarter as the earliest date for relief. He said the OEMs are guiding to “a few more months” for tractors that should have already been delivered.

“A number of the OEMS are going back to some of their larger orders and reducing the amount of tractors they’re actually going to be able to produce in 2022,” Fuller said. “I think the trailer situation is worse. In some cases, to get a significant order we’re being told it could be multiple years … 24 months, 36 months.”

Trailer manufacturer Wabash said it would build only 50,000 dry van trailers next year compared to more than 57,000 in 2019. The company’s backlog, which extends into 2023, has increased to more than $2.3 billion from $1.9 billion at the close of the third quarter. It’s in the process of converting refrigerated manufacturing capacity to dry van production lines but that won’t be completed until early 2023.

Management from J.B. Hunt said delays in equipment deliveries will result in holding onto trade-ins longer than originally anticipated, which will drive its cost of service higher. The increased maintenance expenses associated with running older equipment will be an incremental component of its customer’s rate structure in 2022.

Less-than-truckload carrier Yellow noted a lack of trailers throughout the supply chain as trailing equipment sits longer at shipper facilities that are dealing with issues recruiting and retaining workers.

Yellow CEO Darren Hawkins said he’s most concerned about being able to take delivery of the trailers Yellow has ordered for 2022. He said the company can postpone planned trailer retirements if needed but noted that overall trailer utilization has become a material burden on operations.

“We do not have access to our own equipment as readily as what we’ve seen in the past,” Hawkins said. “And then when you do get that equipment, it’s in the wrong part of the country and we’re having to reposition it.”

Yellow would normally use the rails to reposition trailers but given current network congestion, they have more freight than they can handle.

“I have not seen it ease. I actually feel like demand is expanding for our services,” Hawkins added.

He said Yellow is focused on making timely freight pickups as that is its customers’ biggest concern. “They’re not as focused on transit times as they are getting their freight picked up and getting it into a system and being able to tell their customers that it’s actually in transit.”

Most trucking executives said that multiple rounds of pay increases and sign-on bonuses, as well as the end of enhanced unemployment benefits in September, have helped driver recruiting, but only on the margins.

Fuller noted that August was the toughest month for driver hiring, with only slight improvement since. “If August was a 10, it’s a 9.5 [now].”

J.B. Hunt said difficulties sourcing drivers have plateaued but at a high level.

“For drivers, we’re at a high watermark and we’re holding,” Shelley Simpson, chief commercial officer and EVP of people, commented. She said driver recruitment hasn’t really kept the company from bringing on new business because it can utilize its digital 360 freight platform for capacity and backfill with permanent resources later.

But she said the labor headwinds extend beyond drivers. Difficulty finding workers throughout all levels, from maintenance techs to office employees, has been a burden for the company.

“In the past, we were able to tweak pay or turn pay and that typically would fix 95% of the problem. Today, that’s not the case when it comes to labor,” Simpson continued.

The American Trucking Associations’ estimate of the current driver shortfall is approximately 80,000. But the organization sees that number moving to more than 160,000 by 2030.

“It’s the most difficult driver market I’ve ever seen,” Leathers said. “Has it stabilized at very difficult? That seems to be the case. So it’s staying very difficult but it doesn’t seem to be worsening.”

Searching for a cure

Werner has been bringing on drivers through its academies. It had four additional driver schools operating at the end of the third quarter, 17 in total. The company will have 22 open by the end of the first quarter. Driver sourcing costs and labor expenses incurred as a result of equipment downtime due to parts shortages led Werner to miss third-quarter expectations.

When asked about potential solutions to the driver issue, Leathers said he sees the most potential in opening the driver pool to include candidates as young as 18 years old. He said the plan to reduce driver ages would be “one of the largest advancements for safety” the industry has seen in a while.

“These are true apprenticeships. This is not, ‘You’re 18 years old and here’s the keys to a truck and good luck.’” He said the current proposal for preparing these individuals would require multiple months of training with experienced drivers as well as curfew restrictions. He believes it would also allow the industry to recruit people “from the front of the class.”

“What do you get at age 21? If you wait to 21 because you think that there’s something magical about the number, you get the people that were unsuccessful as an electrician, a plumber, a roofer or welder versus going to the front of the class and getting the best and brightest and putting them in a multi-month apprenticeship.”

He said relaxing hours of service rules wouldn’t be fair to the driver. “They should not bear on their backs our inefficiencies,” Leathers said, referring to the increase in the amount of dwell time drivers are experiencing due to congestion throughout the supply chain.

Leathers doesn’t think increased vehicle or cargo weights will help either “at a time when our nation’s infrastructure is already crumbling.” He said it will take at least a decade until recently approved infrastructure money results in material improvements to the highways.

“For the state licensing, you have to then verify where this schooling took place and the accreditation of that school, which has a minimum number of hours, a minimum curriculum. It isn’t just, ‘I just took the written test, let me go out and take a test and I get a CDL.’ So it radically changes that entry point into the industry.”