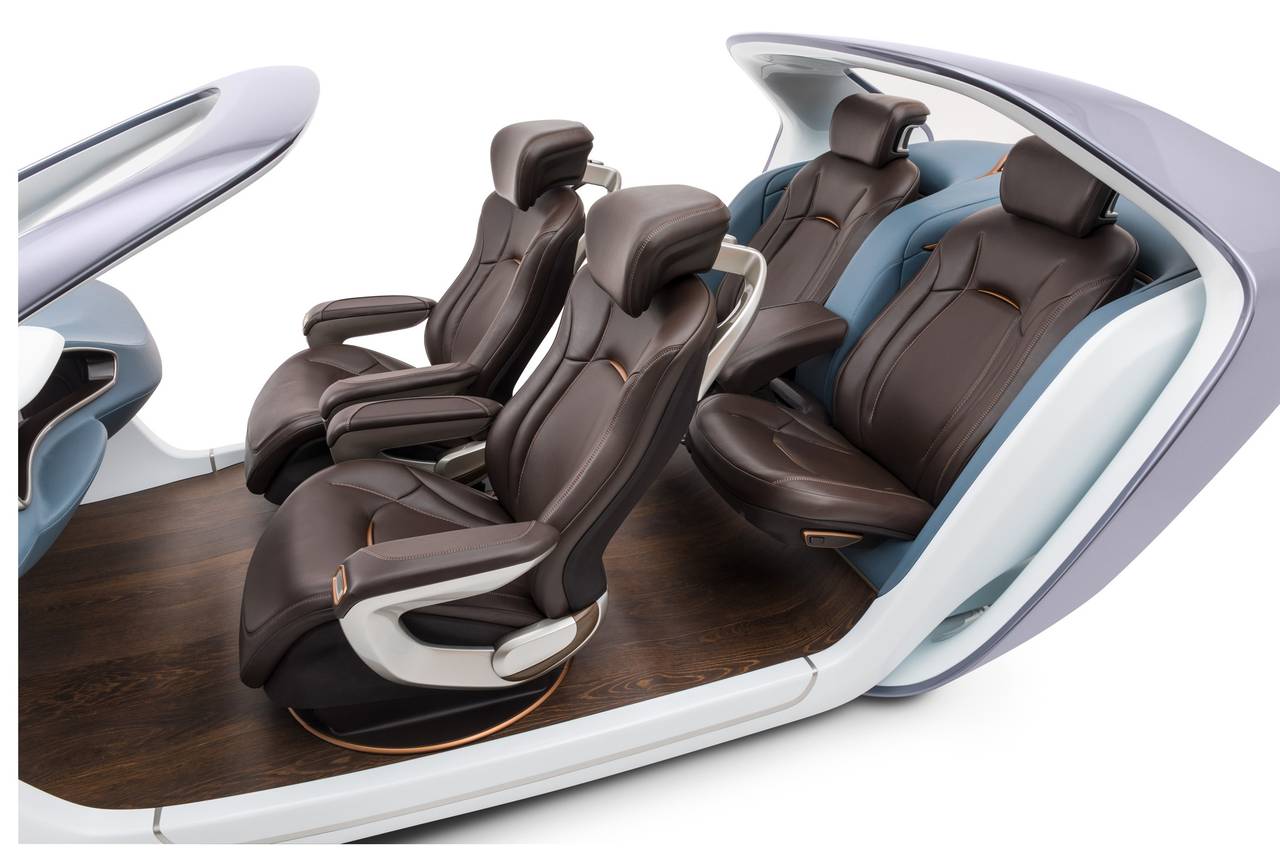 Adient, the world’s largest maker of automotive seating, is a recent spinoff that merits attention.

Spun out of Johnson Controls International (ticker: JCI) last October, Adient (ADNT) has already won plenty of fans on Wall Street. Its shares have shot up 40%, to a recent $64.01, but investors shouldn’t let the big gain deter them. Adient shares look undervalued, and could rise smartly in the next couple of years.

There are a number of things to like about Adient and its stock. The company suffered from underinvestment in recent years under the Johnson Controls umbrella, with its growth taking a back seat to more-profitable Johnson divisions. Now, as a stand-alone, Adient is free to commit its capital to bidding on new business, which it previously might have passed up.

Adient also has an opportunity to boost operating profit margins, which are well below its competitors. Operating margins of 7.2% in the recent quarter could rise to over 9% in three years, as management remedies an inefficient cost structure, a legacy from its time as part of Johnson.

Auto-parts businesses are notoriously cyclical, and the seating business is no different, especially as it relies on new-car production. But Adient draws 40% of its net income from a joint venture in China, a less-cyclical market than the U.S. and Europe. Auto production in China is expected to grow through the end of the decade. 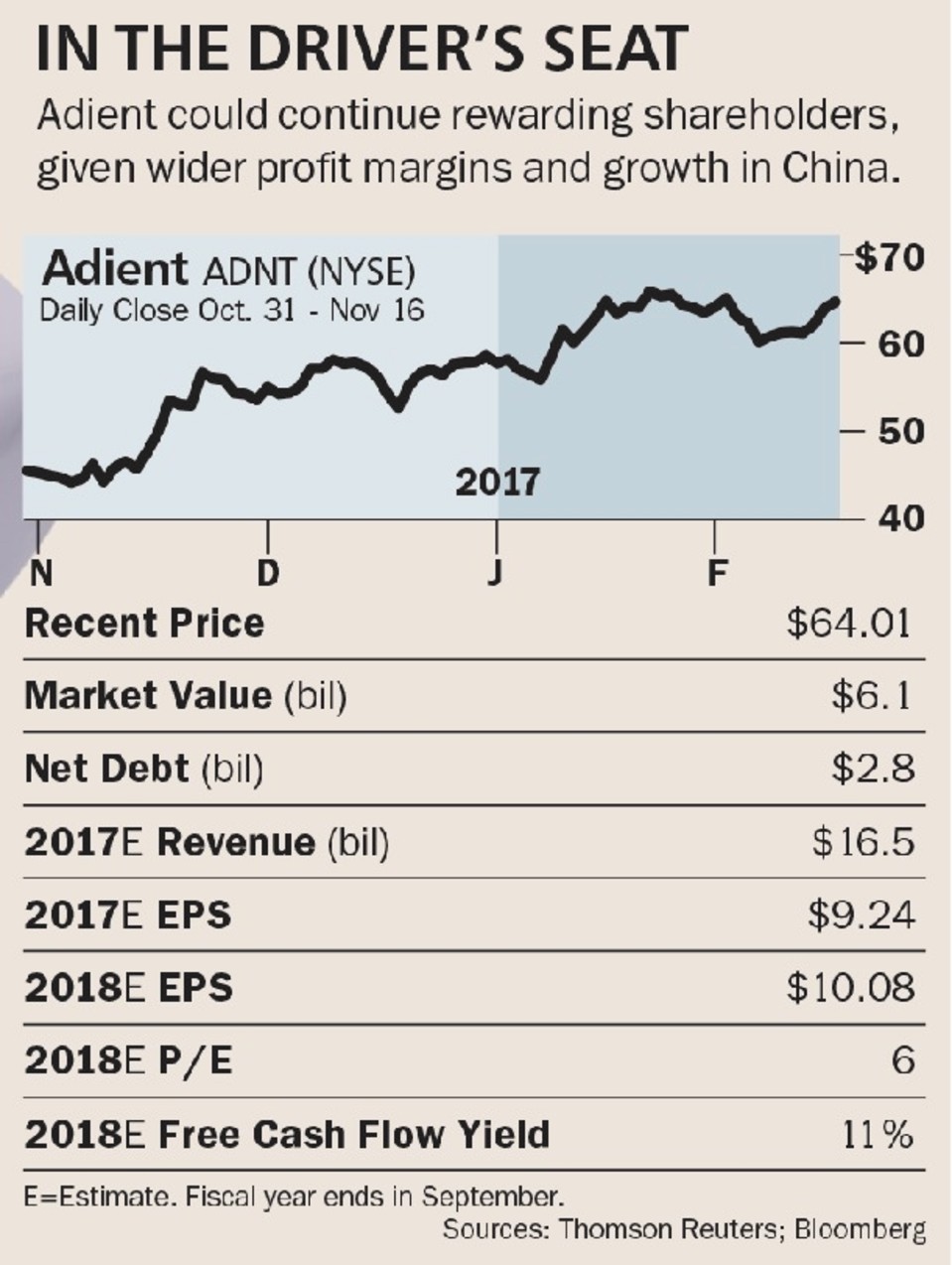 Adient shares trade for six times 2018 estimated earnings. While the low price/earnings multiple isn’t unreasonable for an auto-parts concern, the valuation doesn’t give much credit to Adient’s growing China business and the opportunity for margin expansion.

In a report out earlier this month, RBC Capital Markets analyst Joseph Spak valued Adient shares at $85. That implies a gain of 35% from Friday’s price. To get there, Spak applied a multiple of four times enterprise value to earnings before interest, taxes, depreciation, and amortization (Ebitda) on the core business, and put a multiple of nine times on the income from the China business.

Headquartered in Dublin, Ireland, Adient is truly the seating king, with 34% of the global market, twice the market share of Lear. Every year, Adient makes more than 25 million seat systems. It sells its product to all the big car makers; Ford Motor (F) and Fiat Chrysler Automobiles (FCAU) are among its largest customers.

Adient’s seating products include metal seat structures, foam, fabric, and complete seat systems for cars, pickup trucks, and sport utility vehicles. The company, which operates from 230 manufacturing plants in 33 countries, draws 65% of its revenues from outside the Americas.

In China, Adient is also in the car-interiors business through its 30% ownership stake in Yanfeng Automotive Interiors, one of the largest such businesses. (Interiors include products such as door panels and floor consoles.)

Based on consensus estimates, Adient could earn $868 million, or $9.24 a share, in the current fiscal year, on $16.5 billion in revenue. Analyst Spak, whose 2017 estimates are only slightly higher than the consensus, forecasts $12 a share in earnings by fiscal 2019, driven by better margins, and only 4% sales gains. Adient’s fiscal year ends in September.

This year’s expected free cash flow of $250 million amounts to only about 30% of net income, a level that is well below Adient’s peers. The lower

By 2019, free cash flow could reach nearly $750 million, or a more normalized level of net income, as those costs go away. On that level, the stock trades for an attractive 12% free-cash-flow yield.

THE U.S. AUTO MARKET has been growing for years, and that has invited plenty of skepticism about the industry’s future. While a sharp drop-off in production represents a risk for Adient, as it does for the entire industry, as long as production rates in the U.S. stay flat or decline only slightly over the next few years, the company is likely to do fine.

One recent concern relates to Ford’s announced plans to cancel construction of a new car plant in Mexico. The move will impact Adient’s order backlog by roughly $100 million. Speaking on the February earnings call, Adient CEO Robert Bruce McDonald indicated that he doesn’t see any more risk from customers canceling plans to expand into Mexico.

He commented on two foreign customers who are considering Mexican expansion, saying, “If a decision is made not to invest in Mexico but somewhere else, we will retain that business.”

He added that he doesn’t think Adient has “any further risk other than the Ford issue.”

In China, the auto market could have a weak year in 2017, as government incentives for smaller cars have been reduced. Yet the weakness isn’t expected to be long-lived. IHS Automotive is forecasting growth in the car market through the end of the decade. Adient is well-positioned in seating in China, with a 45% share, and is also a big player in the interiors market.

Some investors might be turned off by Adient’s leverage, which looks high when compared with other auto-parts companies. But the debt, which totals $2.8 billion on a net basis, shouldn’t pose a problem, given Adient’s strong free cash flow.

Management plans to pay down debt aggressively, and leverage could reach much more comfortable levels within two years. In that period, Adient is apt to benefit from its independence. Rising earnings and a higher share price could ensue.