US February benzene settles lower, market moves back into contango

The settlement brought benzene prices to $3.11/gal FOB (free on board) US Gulf.

The decline in the February contract price had been anticipated in the market and matched initial anticipations for February heard earlier in the week. The spot market was softer in January following an extended period of higher prices stemming from prompt supply tightness in the fourth quarter.

February marks the second consecutive month of weaker benzene contract prices following the December settlement of $3.30-3.40/gal, which was the highest settlement seen in 2017.

The benzene market had been in backwardation from late October to mid-January as prompt supply tightness kept current month values above forward month prices. However, the benzene market has recently shifted back into contango, with bids and offers for March being quoted flat to a 2 cent/gal premium over February prices this week.

Deals were heard at $3.11/gal DDP (delivered duty paid) US Gulf for February and at $3.13/gal for March on Monday and $3.10/gal for both February and March on Tuesday.

US benzene contracts typically settle on the last working day of the prior month and are heavily influenced by movements in spot pricing. 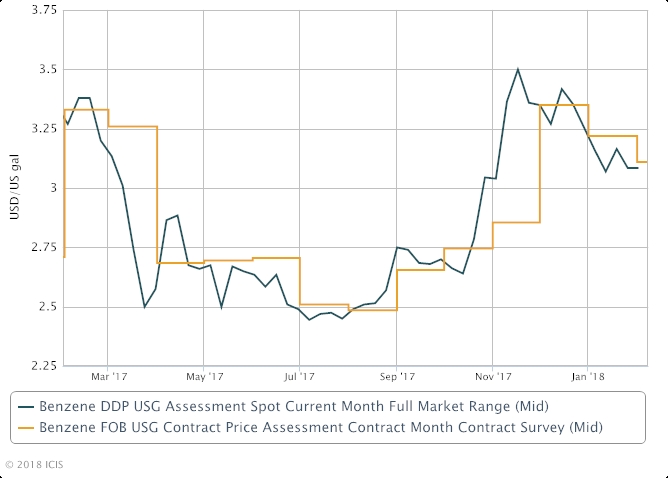