Companies are continuing to use fourth-generation blowing agents in their polyurethane (PU) formulations, despite a recent US court decision that is raising doubt about how the process will proceed or if it will even continue.

That court decision could throw out a portion of the US programme that is phasing out older blowing agents and replacing them with those that are much less potent greenhouse gases.

If the court decision takes effect, the main US environmental regulator cannot compel companies to substitute these older blowing agents with newer ones on the basis of their potential effect on global warming. The blowing agents would need to meet other criteria, such as their threat to the ozone layer, but global warming would not be one of the conditions. 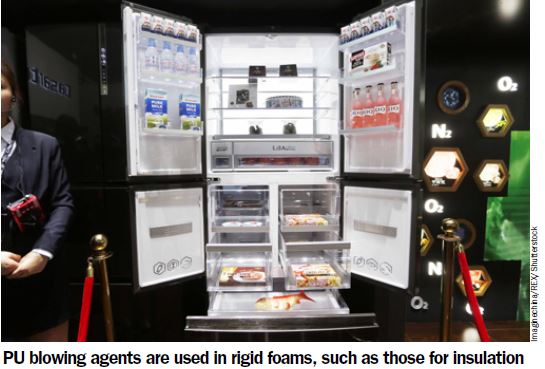 The court decision is still the subject of appeals and challenges. Until these are worked through the court system, the Environmental Protection Agency (EPA) will continue its current schedule of phasing out these older blowing agents, said Margaret Sheppard, an environmental scientist with the regulator.

Sheppard herself did not know when the challenges could work their way through the legal system. But she said others have estimated that it could be weeks or months. Until then, it is unclear how the US could treat blowing agents.

These materials are critical for foam polyurethanes, since they provide the materials with their impressive insulating properties.

Because polyurethanes are so complex, companies cannot simply swap out blowing agents whenever it pleases judges or regulators. Polyurethane systems are made of several components, and when one component is changed, formulators often have to change others.

Until the US court system resolves the decision on blowing agents, companies may put their plans on hold. One delegate said as much during a question-and-answer session with Sheppard.

AHEAD OF THE CURVE

But so far, some of world’s biggest polyurethanes companies expect the industry will continue adopting the new blowing agents.

BASF successfully switched its flexible-foam customers over to the new blowing agents as of November 2016, ahead of the January 2017 deadline, said Mike Krupa, technical manager of Consumer Products Performance Materials, BASF. He made his comments on the sidelines of the conference.

In addition, BASF has already developed and partially implemented new formulations ahead of the upcoming 2020 deadlines, he said. BASF worked ahead of schedule to minimise disruptions.

Krupa said that BASF is moving ahead with its plans to shift to the new blowing agents in all systems, adding that he expects hydrofluorocarbons (HFCs) to be eventually phased out across the industry.

HFOs THE NEXT GENERATION

HFCs are third-generation blowing agents that damaged the ozone layer. They are powerful greenhouse gases, and are being replaced by hydrofluoroolefins (HFOs).

Dow Chemical has mostly completed the process of changing over to new formulations, said Caio Sedeno, commercial vice president, North America Dow Polyurethanes. He made his comments on the sidelines of the conference. Several Dow customers have already converted, and they are unlikely to switch back, he said.

There are several reasons to stick with HFOs. Many companies have already made substantial investments to adopt the new blowing agents. The polyurethanes industry has worked long and hard to prepare itself for the phase out.

Honeywell and Chemours have both developed their own HFOs. These blowing agents have good insulating properties and are much weaker greenhouse gases than HFCs.

For three years in a row, the Center for the Polyurethanes Industry has awarded its Polyurethanes Innovation Award to companies developing products that will help with the changeover.

Honeywell won in 2015 for its HFO, Soltice Liquid Blowing Agent. Sheppard Chemical won the following year for its catalysts, which are compatible with the new blowing agents. Chemours recently won the award this year for its HFO, Opteon 1100.

These awards illustrate the commitment that the industry has already made in adopting the new blowing agents. But even if the US lets companies keep the older blowing agents, they may still opt for the new products.

Other parts of the world are moving ahead with phasing out the older blowing agents, and formulators need to comply with these regulations.

In addition, individual states in the US could pass their own regulations that will phase out the older blowing agents.

Formulators may choose to comply with most stringent state regulations throughout their product lines. By doing so, they would avoid the inconvenience and expense of complying with a patchwork of state regulations.

This is not such a far-fetched scenario. The administration of US President Donald Trump has shown a reluctance to impose environmental constraints on US companies.

Tellingly, it was Chemours and Honeywell that appealed the court decision – not the EPA.

The decision was issued by the US Court of Appeals for the District of Columbia Circuit. The case number is 15-1328.

PODCAST on innovation at the Polyurethanes Technical Conference in New Orleans: https://www.icis.com/subscriber/news/2017/10/06/10150180/podcast-us-polyurethane-conference-highlights-innovation-regulations/