Just in time for Earth Day, chemicals leader Bayer MaterialScience reported from the UTECH Europe 2015 polyurethane (PU) show on programs and applications using its materials to help reduce energy usage. The company also gave an update on its CO2-based PU as that eco-friendly material comes closer to production.

Lightweight, rigid PU foam is used to insulate 95% or so of the world’s refrigerators, occurring in several links throughout the cold chain. But energy efficiency and insulation performance requirements continue to increase. For instance, refrigerators in the B and C energy-efficiency class, with performance that was the norm 15 years ago, have been outstripped by A++ fridges, which are about 60% more efficient due to rigid PU foam. Replacing those earlier appliances with A++ machines would reduce CO2 emissions in Europe by 22 million metric tons per year.

Bayer's Microcell PU system's insulating performance is 10% more efficient than the current standard, helping to reduce CO2 emissions and energy usage. The latest foams have pore diameters that are even smaller, boosting insulating power by reducing thermal conductivity, the company announced from the UTECH show. In developing countries, this could help solve the food spoilage problem. This occurs during transportation of perishable foods in refrigerated trucks, as well as during storage in supermarkets and domestic refrigerators, because of inadequate insulation.

Rigid PU foam is also helping to improve the energy efficiency of commercial buildings. Since these structures account for more than 40% of global energy consumption and about a third of greenhouse gas emissions, greening their design and materials can make a big difference. The redevelopment of a district in Bottrop, Germany as part of the EcoCommercial Building Program has benefited from several energy-efficient technologies from Bayer and other companies involved. One project was to improve the energy efficiency of a Bottrop commercial property so it generates more energy than it uses, using photovoltaic solar, geothermal power, sunlight management, and insulation. 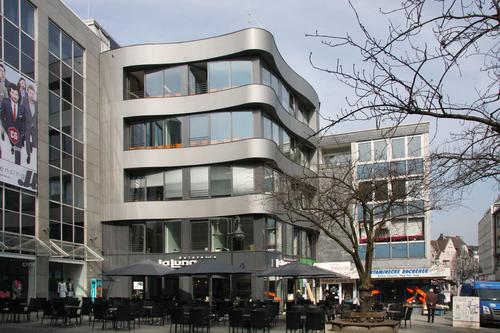 Improving the energy efficiency of commercial buildings, which account for more than 40% of global energy consumption and about a third of greenhouse gas emissions, can be done using several methods, including rigid polyurethane foam insulation. For example, replacing the insulation in a 50-year-old building with material only 10 cm thick can reduce the building's energy losses by as much as 70%. This property in downtown Bottrop, Germany is one example of how such buildings can be transformed into energy-plus properties, and is part of the EcoCommercial Building Program, involving Bayer MaterialScience and several other companies.
(Source: Bayer MaterialScience)

For example, Bayer reported that replacing the insulation in a 50-year-old building with material only 10 cm thick can reduce the building's energy losses by as much as 70%. Highly durable formulations can also last as long as 50 years, greening residents' utility bills. Insulating panels used to renovate older buildings can recoup the energy spent in their manufacture, transportation, installation, dismantling and disposal many times over, based on current energy efficiency requirements. The foams' closed-cell structure means they have good mechanical stability and moisture resistance.

Bayer also gave details on the latest developments in its work on a process for a carbon dioxide precursor for producing commercial quantities of PU flexible foam. The company has extensively tested the new raw materials, and they can be processed with conventional machines. The first products based on the process are scheduled for market launch in 2016.

As we wrote last year, this process replaces all-petroleum feedstocks with a feedstock that includes 20% CO2, based on new polyether carbonate polyols instead of conventional propylene oxide. "At a 20% CO2 share, for example, the consumption of crude oil equivalents per kilogram of polyol would be 14% lower than with conventional production," said Dr. Christoph Gürtler, who works in CO2 research for Bayer, at the UTECH show.

In addition to reducing CO2 by using it in the precursor, the process also replaces CO2 that naturally occurs in conventional polyol production. This is possible because production of the new polyols requires less propylene oxide and its corresponding CO2 load than in the energy-intensive petrochemical synthesis. By integrating carbon dioxide into polyols, Bayer found it saves several times more CO2 than is emitted during the manufacture of polyols that are based completely on propylene oxide. "The ratio is nearly one to three, which underscores the ecological benefit," said Gürtler. These figures stem from a life cycle assessment made by RWTH Aachen University, which was presented at UTECH by a university representative.

A different CO2 polyol is being developed for use in viscoelastic foam. The company is also working on other CO2-based polyols for thermoplastic polyurethanes and cast elastomers. A newer PU process reduces precursor petroleum even further, from 80% to 60%, and also widens the types of plastic that can be made with it. CO2 appears in two places there: a polyoxymethylene polycarbonate polyol precursor reduces petroleum by 20%, while an additional 20% is replaced by another chemical incorporating CO2. The new manufacturing process has already been proven in the lab. It can be used to make thermoplastic PUs, films, and casting elastomers for applications such as automotive interiors, cable sheathing, and sporting goods.