A seller – not BASF – welcomed the move, considering the four-year downturn in BDO prices. “It’s more than about time,” the seller said.

There has been no meaningful US BDO contract price increase since late 2012, with flat demand and oversupply weakened by falling oil prices, as with other petrochemicals.

US BDO prices rose slightly in each of the first two quarters of 2014, but since then, BDO contracts have dropped for seven straight quarters. 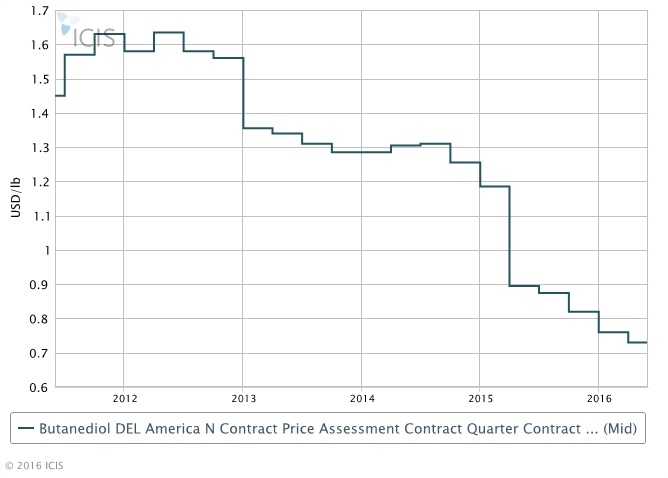 US and European BDO prices continue to rank as the highest in the world, with Asian prices at least 20 cents lower.

Buyers say there is too much BDO capacity, not just in the US but in China, though there is not much of a market in imported material.

A buyer called the increase out of line. “It should be a roll or coming down,” the buyer said of the BASF proposal.

BASF did not explain its price increase in the statement issued on Wednesday, 1 June.

BDO and its derivatives are used for producing plastics, solvents, electronic chemicals and elastic fibres.

BASF tried to raise prices in January by 5 cents/lb but the market ignored it and first quarter contracts dropped 6 cents/lb.

BDO second quarter contracts settled down 3 cents/lb on continued oversupply in the market.

In May, market sources began talking about a possible rollover for third quarter contracts, largely because of the recent rise in oil prices.

Major US BDO producers besides BASF include Ashland, Invista and LyondellBasell.