LONDON (ICIS)–Shifting global balances and the slump in the oil and energy complex have seen the European benzene market open the year with a sluggish start so far. While there has been the inkling of recovery in key derivative sectors as 2015 unfolds, spot prices are so far proving slow to react.

Following several years of relative disconnect between the two products, European benzene prices dropped in tandem with the sharp plummet of global crude oil prices seen towards the end of 2014.

With oil prices from 2011 to mid-2014 proving steady within a historically high bandwidth, European benzene spot values had previously cues from regional supply constraints in a bullish landscape, with the impact of shale oil and reduced pygas availability driving up prices. 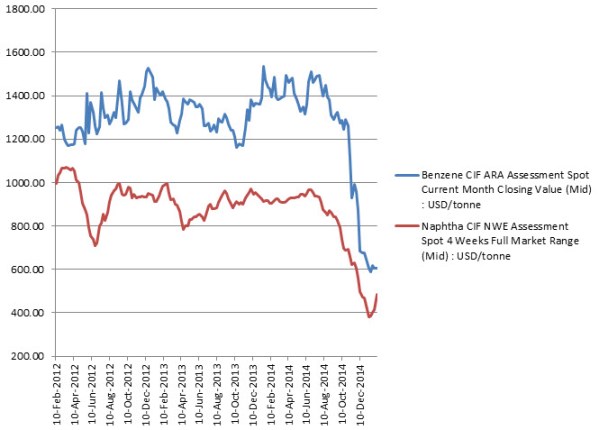 However, the last few months have fundamentally altered the outlook for the European aromatics chain. By the end of 2014, the plunge in crude oil pricing pulled spot benzene numbers down to levels not seen since the aftermath of the 2008 crash. 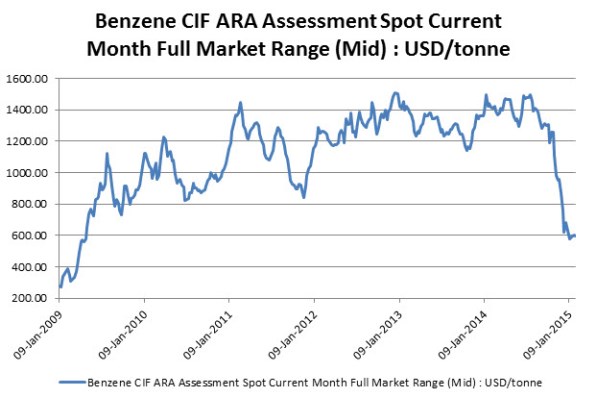 And while there has been a steadying of the market so far this year, the feeling in Europe remains skittish overall, with price levels chasing crude movements up and down on a daily basis, and no real sense of any fundamentals-driven direction.

Yet the headline-grabbing developments in the crude oil market do not tell the full story. Even by October 2014, there was already a sense that a global sea change was imminent for benzene with the arrival of significant new capacities in Asia, with European spot levels dropping by $250/tonne between July-September 2014.

The increase in capacity was to feed a swathe of new downstream phenol units in China, but this was also expected to bolster Korea export volumes and help redress the balance of the perennially tight US market following the shale oil revolution.

The subsequent plunge in oil pricing following the decision by OPEC not to curb output following its meeting in Vienna in late November 2014 triggered further downward movement on benzene, pulling European prices back below $600/tonne by early January 2015 amid year-end inventory control.

Since then, healthy cracker margins have seen ample pygas output adding length to the benzene market, and with January demand from the key downstream styrenics market traditionally muted during the winter season. Some of this length has crept into February, with lower numbers heard for prompt delivery earlier this week.

“There has been no issue with securing material,” said one major European consumer last week. “Usually with benzene there are timing and logistical concerns, but nobody seems to have any of these problems right now.”

This has limited any significant upside so far in 2015 despite the recent upturn in oil pricing, perhaps an indication that there is still little faith in the oil and energy sector when it comes to a sustainable recovery this year.

One other telling factor is the current naphtha/benzene spread, which has recently narrowed to its lowest point since late 2011 when benzene prices saw a brief slump amid weak demand.

European benzene spot prices have hovered just above $600/tonne so far in February following the monthly contract settlement at $590/tonne in US dollar terms, while Brent gains and export demand have driven naphtha up to the high $400s/tonne. Previous rules of thumb about the spread between the two now seem completely inapplicable in the current market.

However, with March benzene already in a firm $20-30/tonne contango this week, some players believe that the European market could see an upturn by the end of the first quarter.

Certainly, the overwhelming feeling in key downstream markets is much more positive this month. Styrene prices have spiked back up above $1,000/tonne FOB this week amid renewed buying interest from industry players, while several polystyrene (PS) producers have reported demand levels so far in February eclipsing anything seen in recent years.

Yet there remains some trepidation among some styrene players. One EPS producer said: “The jump in styrene right now being supported by some short-term tightness, with industry doing most of the buying. Is it really sustainable?”

Indeed, despite expectations of tightness in the European styrene market due to planned turnarounds in previous years, the market has seen sluggish demand keep supply ample even with significant output reduction. Key end-use markets such as construction are subject to the vagaries of the weather, which can be tougher to predict than price movements on oil.

And with a spread of around $400/tonne over benzene, the current bull-run on styrene seems unlikely to hold unless there is a corresponding upturn on benzene. 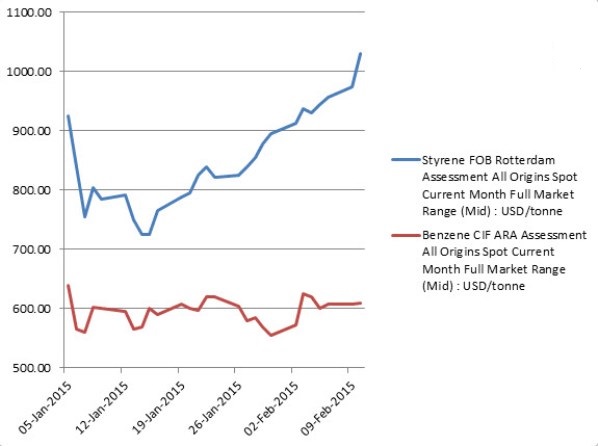 But the benzene market in Europe has often in the past seen prices move more with sentiment than fundamentals, and these movements are often sharp. As one source quipped back in early 2014 amid pricing volatility at the time: “You’re better off employing a psychiatrist not a trader.”

And it is this uncertainty that has kept many downstream aromatics players wary of following feedstock prices all the way down this year.

“Chinese phenol demand will balance out the global benzene market by the second half of 2015, so in theory this should support some recovery,” said one caprolactam producer late last month. “The downstream chain needs to manage the current downtrend on pricing sensibly. The supply/demand balance is key, because won’t bounce back as fast as benzene.”