Europe benzene poised for another triple digit rise in May

LONDON (ICIS)–Players in the European benzene market are braced for a significant increase on the May contract settlement later this week, sources said on Wednesday, with regional availability tightening due to better demand, exports across the Atlantic throughout April and growing limitations on feedstock supply.

Following the April contract settlement at $730/tonne in US dollar terms (€611/tonne in euros), European spot levels have gradually moved higher over the course of the month (see graph).

May spot numbers have been hovering around the $900/tonne CIF (cost, insurance and freight) ARA (Amsterdam-Rotterdam-Antwerp) mark, with deals done as high as $905/tonne last week.

The upturn has been tempered slightly so far this week alongside lower Asian numbers. May traded yesterday at $890/tonne, and the bid/offer range was at $880-900/tonne this morning.

With the arbitrage window from Europe into the US Gulf region opening, sources said that as much as 40,000 tonnes of benzene has moved from Europe across the Atlantic since the end of March 2015. The recent increase in ARA pricing has effectively closed the arbitrage window now. US benzene prices hit a yearly high last week, trading at $3/gal FOB (free on board), but have since eased off slightly.

One trader noted that with European prices above $900/tonne, this would make imports of US benzene into Europe feasible. However, other sources did not see this happening in any sustained way, due to strong styrene demand in the US and an overall regional structural shortness for benzene.

There has been concerted effort among European players to clear out some of the length that had built up over the course of the first quarter this year. Eurostat figures from earlier in the first quarter also show rising year-on-year exports out of the EU, as higher run rates at crackers owing to healthy operating margins pushed ample pygas into the market, while limited derivative demand also kept benzene supply long.

But with European crackers now opting for lighter feedstocks now the winter season is drawing to a close, this is making LPGs more attractive than naphtha, further curtailing pygas availability in Europe. Firmer gasoline demand in the US due to the upcoming driving season has also pulled volumes out of Europe since March.

European derivative demand has also begun to pick up ahead of May. Sources reported that there is now increased demand from the phenol sector, with players anticipating another triple-digit price hike on the May benzene settlement later this week.

There are some ongoing styrene turnarounds in Europe, which had previously led to a build-up in regional benzene supply. One producer is said to be coming back on-line before the end of April. Other units are still shut down but anticipated to be back up and running by mid-May, which will create some additional pull on benzene later in the month.

Looking further ahead, the European benzene market remains in contango into the second half of the year. There are several upcoming cracker turnarounds that will keep pygas output limited in the coming months.

With numerous Chinese phenol units expected to come onstream later in 2015, the outlook for global benzene is bullish, with US pricing likely to stay firm because of reduced exports out of Korea.

There is some apprehension from downstream players in Europe about another sizable increase on the monthly contract in May. The current euro/US dollar exchange rate dynamics will also further increase the euro value of benzene.

“A triple-digit increase seems likely,” said one European nylon producer. “But we hope it is as close as possible to €100/tonne.” 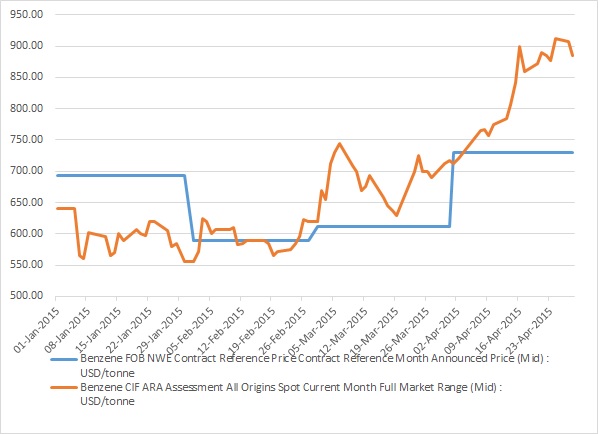