PE imports into Europe from new capacity in the US are expected to have more of an impact in 2019, although by the end of 2018 already large volumes for particular grades were already heading eastwards.

The picture for PP in 2019, on the other hand, will be marked by the planned cracker maintenance programme that may leave monomer very snug.

The long-awaited PE imports from the US have finally started arriving, with large volumes of C4 (butene based) and low linear density polyethylene (LLDPE) have already been shipped to Europe, with prices for those grades plummeting.

European PE net prices were low in global terms, with many spot net prices below the headline contract price, a phenomenon that has been in place for some weeks.

While the flow of imports from new US capacities was slow for most of 2018, it accelerated towards year-end and volumes have already been booked for January.

With December prices falling on the back of lower naphtha prices, January arrivals could be too high to work.

PP prices have also fallen, but erosion has been milder, and imports were not such a feature in this market.

The PE market is not as weak as it might have been, however, as low water levels on the Rhine have affected output at some sites.

One LLDPE plant in Germany has also been offline for some time, but in spite of this there have not been supply shortages and buyers are relaxed.

In 2019, a series of planned cracker outages is expected to offset an increased volume of imports to an extent, as PE output will inevitably be down alongside the cracker outages for some of the time at least.

PP will also be down during this time, but in this market the fear of crackers being slow to come back on line is stronger.

If all goes according to plan, there should be no problem with ethylene supply, or even propylene, but any delay in one of the big crackers in particular could lead to supply issues on monomer, and hence polymer.

Some PP producers have made significant efforts to ensure they have secured enough propylene for 2019, but that it has been an expensive exercise.

PE will be a different story.

Ethylene output will be lower in 2019, but with availability of imports from new capacity there should be no shortage of product, and several buyers have been talking to new sellers to arrange contracted imported volumes for 2019.

Between the third quarter of 2017 and the end of 2019, US PE capacity will have increased by 6.5% in tonnes/year, which represents an increase of 39% of capacity.

Moreover, by the end of 2022 this will amount to an increase of 12.1m tonnes of PE, according to ICIS data, meaning an increase of 74% in US capacity over the whole period.

In the short term, some PE players in Europe expect prices to rise, however, arguing that net prices are lower than the ethylene contract and polymer margins are thin, with most of the margin in the cracker.

The success of any move to increase prices would depend on the level of demand in the market.

Europe is a net importer of several PE grades, and imports are key to sustain the market.

Fears of an economic slowdown in Europe, and a trend toward using recycled material and less plastic, could also begin to affect consumption of virgin plastics.

An added complication comes from the trade war between China and the US, which is expected to cause changes in trade flows, although these would still take time to take effect. 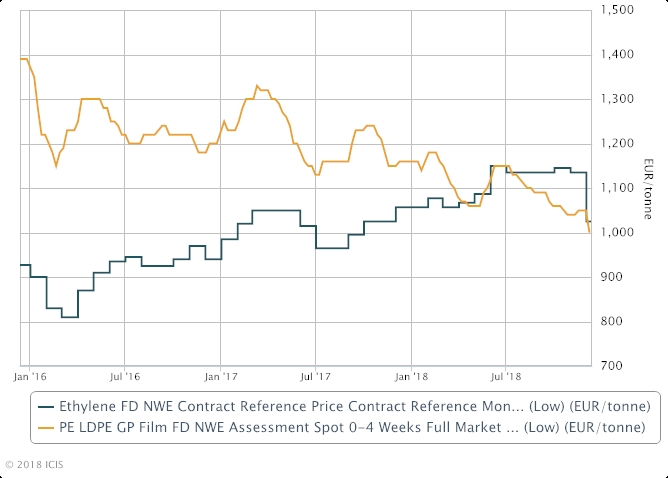 PE and PP is used in packaging and the manufacture of household goods. PP is also used in the automotive industry, and PP in automotive.

Pictured: ExxonMobil has begun operations at its ethane cracker with a capacity of 1.5m tonnes/year of ethylene at its Baytown site, Texas. (Photo source: ExxonMobil)