US petrochemical investment – the long wave

With the first wave of the new US crackers and downstream projects starting up, you might think capital spending (capex) in the US chemical sector has peaked and is headed down. Yet this investment wave could last longer than many think.

He expects this long wave of US investment to “continue through the middle of the next decade, and most likely accelerate”. 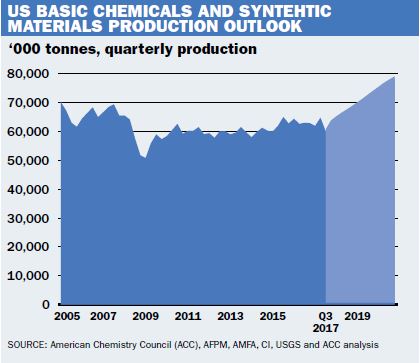 Planned investment in the US chemical sector arising from shale gas has hit around $185bn, with only about $35bn completed, according to the American Chemistry Council (ACC).

The analyst expects the capex figure to catapult to $240-250bn by 2020 with over $20bn coming from new ethylene projects.

The US commodity chemicals sector had largely been a mature market, with long-term growth prospects of 0.3-1.0x US GDP. However, this is changing, according to ACC chief economist Kevin Swift.

“Renewed competitiveness from shale gas is making the US the region in which to invest, and resulting in a higher growth premium,” said Swift at a meeting of the Chemical Marketing & Economics Group (CME) in New York.

These are multiples of US GDP growth and stunning numbers for a supposedly mature market. The magnitude is also surprising given the not insignificant size of the US basic chemical market at a hefty $271bn.

So far, the demand side is cooperating with a synchronized global economic upswing which is also expected to continue in the coming years, said Swift. This should be a tailwind for the US chemical sector and exports in particular.

And importantly, all major countries and regions are expected to be in the green through 2020, with India showing the highest annual growth in the mid-7% range, and Japan the lowest at 1.0% and below, Swift pointed out.

While the demand side appears accommodating, the supply side outlook is not expected to be as sanguine, as the US is not the only country with ambitious petrochemical expansions plans.

“Capacity additions in the Middle East and Asia look likely to come in faster than we had expected, and by 2019 China should have both ethane/LPG crackers running and, most likely, a more extensive pipeline of ethane-based projects,” said Alexander of Jefferies. The analyst points out that earlier in 2017, SP Chemicals and Wanhua started construction on crackers in China that can run on ethane, which should start up in 2019-2020.

Engineering firm Technip (now TechnipFMC) in February 2016 announced it would supply proprietary technology and equipment to SP Chemicals for its new 650,000 tonne/year gas cracker in Taixing, Jiangsu province, which would use ethane and propane feedstock from North America. “We expect China to incentivize ethane-based or flexible crackers to reduce the risk of a rapid expansion in the arbitrage window between US-based and Chinese production in future cycles,” said Alexander. Plus, there are as many as 15 new cracker projects – mostly naphtha-based – being discussed for China, he added.