HOUSTON (ICIS)–US propylene spot prices jumped on Wednesday as the market awaits the start-up of new capacity and the restart of a production unit.

January polymer-grade propylene (PGP) traded on Wednesday at 62 cents/lb ($1,367/tonne), up 19% from the previous deal at 52 cents/lb for front-month December material on 29 December.

Spot PGP values rose in early January as bids for front-month material climbed against no offers. US PGP spot prices had been assessed at 53.0-57.5 cents/lb for the week ended 5 January, based on those bids.

The upward pressure on PGP values is due primarily to two propane dehydrogenation (PDH) units and low inventory levels.

A newly built PDH unit at Enterprise’s Mont Belvieu complex in Texas continues to ramp up, with the most recent expectation that it will achieve full operating rates in early 2018. Previously, the unit had been expected to start up in September but was delayed due to Hurricane Harvey.

An existing PDH unit at Dow’s Freeport complex in Texas is shut down for maintenance and could be offline into early February.

Meanwhile, inventory levels have remained low compared with year-ago levels, falling to a nine-month low in the first week of 2018.

Prior to the Wednesday jump in spot PGP prices, market sources already had expected a significant increase for contract prices in January due to the tight market and spot surge.

December PGP contract prices had settled at 50.0 cents/lb prior to the Christmas holidays, while PGP front-month trades during December had ranged at 48.0-52.0 cents/lb.

Nominations for January contracts were not heard from all producers but have so far ranged at increases of 5-8 cents/lb.

The PGP market “has gone crazy,” one market source said, noting that the Wednesday trade could push contract price increases higher than expected.

“The trade is not representative of the market,” another source said, noting that the uncertainty could lengthen negotiations.

A sharp increase in contract prices could affect propylene demand. 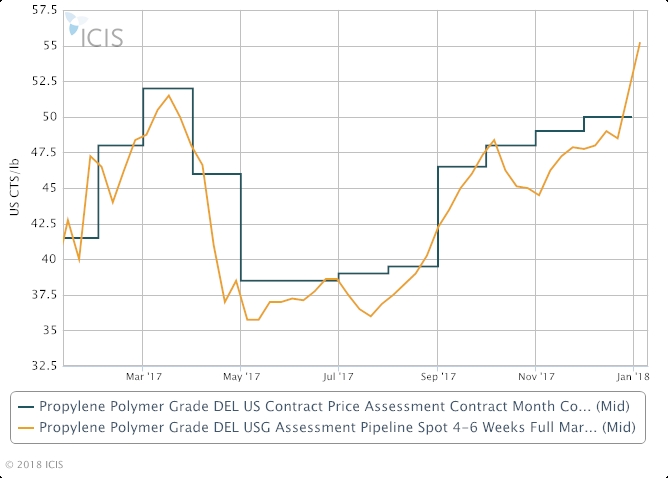