Kumho Petrochemical on track to up synthetic resin production 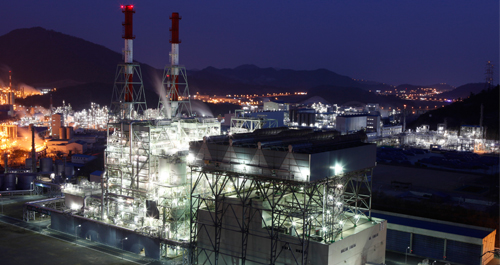 Kumho Petrochemical said Friday that all production expansion works of itself and its affiliates are going well as planned. It is expected to complete ramping up its synthetic resin production by 16,000 tons by June this year as scheduled and its unlisted affiliate Kumho P&B Chemicals Inc. also is in full gear to finish expanding its epoxy production by 17,000 tons by June. Prices of both synthetic resins and epoxy have been rising due to falling in global production level with China’s tighter environmental regulations.

Earlier this year, Kumho Mitsui Chemicals Corp. – a joint venture between Kumho Petrochemical and Japan’s Mitsui Chemicals Inc.- completed expanding its Methylene Diphenyl Diisocyanate (MDI) production by 10,000 tons. MDI is a key material for polyurethane, which is used in manufacturing various products ranging from insulator forms for refrigerators and car seats to shoes. The company became Korea’s No. 1 MDI supplier, dethroning BASF Korea, with this ramp-up.

By Lee Dong-in and Cho Jeehyun