HOUSTON and LONDON, July 21, 2017 /PRNewswire/ — LyondellBasell (NYSE: LYB), one of the world’s largest plastics, chemicals and refining companies, today announced the final investment decision to build the world’s largest propylene oxide (PO) and tertiary butyl alcohol (TBA) plant in the Houston area. The project is estimated to cost approximately $2.4 billion, representing the single-largest capital investment in the company’s history. At the peak of construction, the project is expected to create up to 2,500 jobs and approximately 160 permanent positions when operational. 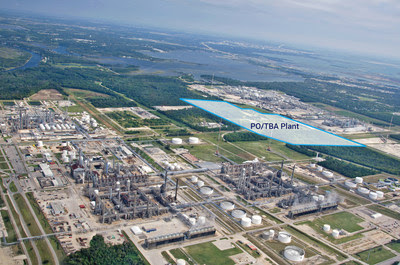 “This world-scale project is a key part of our organic growth strategy which is designed to meet rising global demand for both urethanes and cleaner-burning oxyfuels while creating real, long-term value for our shareholders,” said Bob Patel, CEO of LyondellBasell. “Our investment in this plant combines the best of both worlds: our leading PO/TBA process technology with proximity to low-cost feedstocks, which gives LyondellBasell a competitive advantage in the global marketplace for these products.”

“We are pleased that LyondellBasell continues to view the Houston area as important to their global operations, creating jobs and opportunities for Houstonians,” said Bob Harvey, president and CEO of the Greater Houston Partnership. “This new project further advances Houston’s position as a global hub of petrochemical manufacturing, leveraging Houston’s strategic access to the Americas and top markets around the world.”

Built to serve global markets
Once in operation, the plant will produce an anticipated 1 billion pounds (470,000 metric tons) of PO and 2.2 billion pounds (1 million metric tons) of TBA annually. PO is used in the manufacture of bedding, furniture, carpeting, coatings, building materials and adhesives, while the TBA will be converted to two ether-based oxyfuels, methyl tertiary butyl ether (MTBE) and ethyl tertiary butyl ether (ETBE). Both MTBE and ETBE are high-octane gasoline components that help gasoline burn cleaner and reduce emissions from automobiles.

LyondellBasell plans to sell the PO and derivative products to both domestic and global customers, while the oxyfuels will be primarily sold into Latin America and Asia. A portion of the TBA will remain in the domestic market in the form of high purity isobutylene which is used in tires and lubricants.

The majority of the products will be exported via the Houston Ship Channel.

Project overview
The PO/TBA project will have a split facility design to optimize product balances and realize synergies between LyondellBasell sites. The proposed location for the PO/TBA plant is the LyondellBasell Channelview Complex located in Channelview, Texas. The associated ethers unit, which will convert TBA to oxyfuels, is proposed for the company’s Bayport Complex near Pasadena, Texas.

The company has completed front-end engineering design work and received the required environmental permits. Site preparation is underway and construction is expected to begin during the second half of 2018. It is anticipated the project will be completed by the middle of 2021. Final site selection is contingent upon final approval of certain economic incentives by the state of Texas.